Is Resurrection Your Experience? 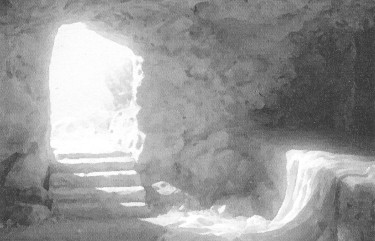 In this Internet Age finding a conspiracy theory is easier than ever. It seems that there is always someone trying to convince you to deny the obvious and believe in a well orchestrated clandestine series of events that provide an alternate explanation to the one commonly held. Often the fuel for the theorists is fear. Clearly this is nothing new, since Matthew tells us about the religious leaders of Jesus’ time fearing that his followers would steal his body and tell a story about his rising from the dead. And then when the body goes missing they pay the guards to tell that very story as cover. That is if we are to believe Matthew’s version. If you read the other gospel accounts, the events surrounding Jesus’ death happen in different ways. Do the disciples go to Galilee to see Jesus again or do they hole up in Jerusalem with Jesus appearing in their midst behind locked doors?  Can Jesus be held right after the resurrection or does he have to ascend to his father first? Can he even be recognized? In Matthew’s version, the women meet Jesus and immediately worship him, while according to John, Mary mistakes Jesus for the gardener at first. Didn’t the gospel writers know that the first rule of a successful conspiracy is to get your story straight? Which story should we believe? How do we know what story is true?

Each of us will have differing principles for determining what to believe. It may need to be rational, or it may need to be consistent, perhaps it needs to be repeatable, or perhaps it just needs to feel right. Regardless of criteria, we are all inclined to apply tests of credibility to any story we hear before we are willing to receive it as true. But what if our skepticism is misplaced? Maybe rather than asking the question “can I believe it?” we should be asking “why should I believe it?” As I contemplate the fact that all of those who were closest to Jesus were willing to go to their deaths rather than deny the resurrection despite conflicting details, it occurs to me that the truth in the story is not to be found in the details but in the way lives were changed. Let’s think of it in terms of someone telling you that they have seen a ghost. If you heard this, what would it take for you to believe the reporter? Perhaps the relationship with the person would persuade you one way or the other, but even then you would likely want some evidence. Let’s assume that all the arguments in favor were unconvincing but this is some sort of dystopian future where someone holds a gun to the reporter’s head demanding that they deny the story. Now if that person is willing to die rather than recant then at minimum you would have to believe that that person believed the truth of the story. That has to be the least we can take away from the history of martyrdom of the first century Christians.

So what truth is worth dying for? Why would someone die simply to defend a story that a dead man returned to life? Seriously, what difference does a physical resurrection make? If you weren’t convinced to follow Jesus before death, why would that change after his return from death? Surely the truth must be that the lives of the martyrs were changed so radically that they not only didn’t fear death, but were willing to give their lives because they had absolutely no doubt that the radically life-changing experience of claiming the resurrection was worth it. As we grapple once again with the Easter story we are challenged not with the question of whether we believe that God raised Jesus from the dead but rather have our lives been changed by the story. Is resurrection your experience?