We’ll Get Together Then, On a Golden Autumn Day

Amos climaxes his argument here in chapter 5. The point of having God is not so that you can do religious things, but rather so you can treat your neighbor, yourself, your entire world with justice. In other words, without God, you’re never going to be righteous.

Immediately, whenever you say something like that, an argumentative type says, “What about an atheist who works in a soup kitchen? What about a non-Jew (or Christian) who takes care of her grandparents? Isn’t she righteous? Aren’t they doing justice?” Sure. BUT–the whole reason for believing in, with, and under God is for justice. So, not only should atheists, non Jews/Christians be doing justice, but so should Christians and Jews.

And now the argument goes, “Wait! Aren’t we suppose to worship God? Isn’t that the whole reason for believing in God?” Not according to Amos. I suppose worship and justice are the two arms of our relationship with God, but for Amos, the justice arm is the more important one. ( For this reason, I assume, congregations that are somewhat justice-averse don’t spend six weeks reading Amos.)

But I wonder how many of us believe in God so that we can be just or righteous with our neighbors, our families, our friends, and even our own selves? Have you ever heard this song by Harry Chapin? Cat’s in the Cradle is one of those haunting songs that gets you to tears pretty fast.  Dads, moms, sons, daughters, we are all subject to  the pressing issue of time. We all get older. We all let things slip away, even things we love and cherish like our children or our parents. We replace all our important relationships with the things we want to do, or think we should do, or other people tell us to do, and then it gets too late to do anything at all.

Over the years I’ve met many people, and most have slipped away from me. I got too busy building a new life, focused on raising my kids, supporting my family. A lot of friends I can stay in touch with a bit through Facebook, but since they’re my friends many of them post as infrequently as I do. So I have lost a lot of great relationships, a lot of justice, a lot of righteousness through my focus on me and my stuff.

I wonder if Amos knew stuff like that happens. A lot of scholars think Amos was some kind of priest, and did he know the anguish of the human heart that laments the lack of righteousness or justice in our world, even though our intentions are noble and good? I mean, just last night while I was talking to my daughter in Los Angeles, my brother in Minneapolis called, and I missed the chance to talk to him because I was talking to her. And time says YOU CAN’T HAVE IT ALL!! Bastard time. I want to talk to both my daughter AND my brother, but alas…

Maybe there is no definitive answer to this conundrum: maybe we live with the righteousness we are allowed by time and space? What I love about Amos is that he is convinced that being “religious” is not a substitute for being “righteous.” And given the choice between the two, “righteous” is God’s preferred option. 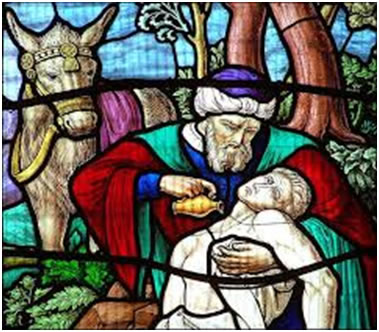 And Jesus of Nazareth also knew something of this which Amos speaks. Jesus tells a story about a Samaritan man, whom many Jews felt that as a Samaritan he did just not worship God the right way in the right place, but even though he had that “handicap,” he still was able to be righteous (just) when the time came.  I wonder who the Samaritan ignored so he could help a Jew, his enemy? Did his wife say, “What are you spending our money on that heathen for?” Did his daughter say, “Dad, how come you missed my baseball game?” Did he have to tell his boss he was late for work because he was helping a Jew? This justice gig is fraught with peril. Somebody is not going to like you when you do it.

But, both Jesus and Amos seem to think God will still like you…and sometimes that’s enough, but you and I both know, gentle reader, that sometimes it isn’t.

Scott Frederickson, Ph.D., is a Lutheran theologian and educator. He blogs regularly at “Thoughts from the Prairie Table.”