The phone woke me at 9 AM on Christmas morning.  I hadn’t meant to sleep this late, but I was so very tired when I had finally crawled into bed just four hours earlier.  Dispatch was requesting that I return to the fire ground.  I had been expecting this call, and knew what it meant.  My family was gathering to open presents.  Thankfully the coffee was already made, so I filled my travel mug as I informed my family, again, that I had to leave.  Just like the night before when the alarm was struck for a structure fire with occupant inside, no one questioned my decision to go.

Ever since my first week in student ministry when the news of Joe’s death shook up the gathered homeless folks at the shelter, I’ve known the power of the ministry of presence.  The church offered a memorial service for Joe, the first of far too many that I attended and officiated during the time I served there. When possible, we were present at the time of dying or soon after death.  It was essential to our core message to walk the talk that no one is ever forgotten by God.  Even when only my wife and a man whose mental illness kept him from knowing whom we were remembering, we still memorialized “Filthy Frank,” a man who earned his nickname by being less than nice.  But he was no less a child of God.  No one is not God’s child…no one.

And no person can ever fit comfortably into a single descriptive category. One evening at the shelter the news was reporting a story about “the homeless” when Rosie’s voice, slurred as usual by her drinking, rang out saying “we are not the homeless, we are…” (and now you could have heard a pin drop) “…just people without homes.”  Amen, Rosie, labels are for jars.  I’ve never used the term the homeless since.

The first assignment my supervisor gave me at the beginning of my student ministry was “mingle.”  “Just mingle?” “Yes, just mingle!”  Those months of simply being with people, breaking bread with them, hearing their stories, sharing in their lives, transformed me.  I had to face my guilt, and anger, and sadness. and shock…in order to find the truth in the saying sein ist mitsein: “to be is to be with.”

Peter Ilgenfritz’s homeless friend Wayne called forth from Peter the gift of being with.  Peter took the initiative to get invited and then had the grace to enter Wayne’s world.  Peter’s actions remind us all that we need to be God’s arms to embrace so that the world will know the good news that Emmanuel (God with us) has come and loves us and calls us by name. 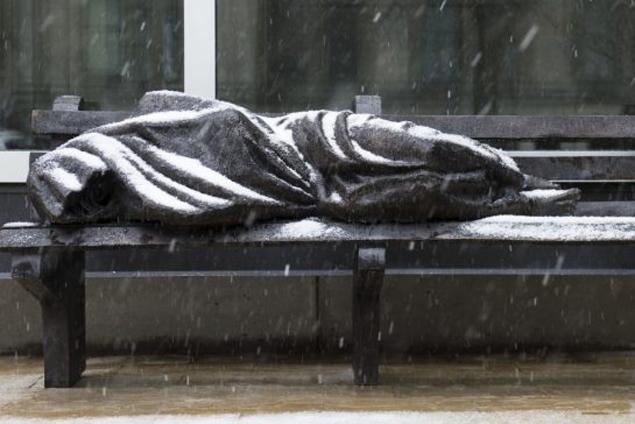 It was obvious not only to me, but to my family, that the proper place for me to be on a cold Christmas morning was standing where life had left the body of man who was a bit of recluse and likely quite drunk when his house burned down around him. For that place is surely holy as is any place when we are with those who suffer.  In those places and in those times we give ourselves the gift of being with Jesus.