Total confession…perfect for the first of a 6-week series on the Lord’s Prayer:

I haven’t prayed the Lord’s Prayer in it’s entirety for years.  Three reasons.  The wording bothers me, I’m not wild about praying out loud at all, much less with other people, and finally, I’m not big on asking a personal God to do things for me.

I know it’s a great prayer.  I understand the tradition and can even accept or forgive the language as a sociological artifact.  I also understand the power of the prayer for many people.  It just doesn’t sing to me.  So, I’m hoping that this exploration of the prayer in “Ancient Context and Modern Voice” may help either reconnect me or at least soften some of my objections.  In the mean time, here’s what I think I can get behind as an editor: 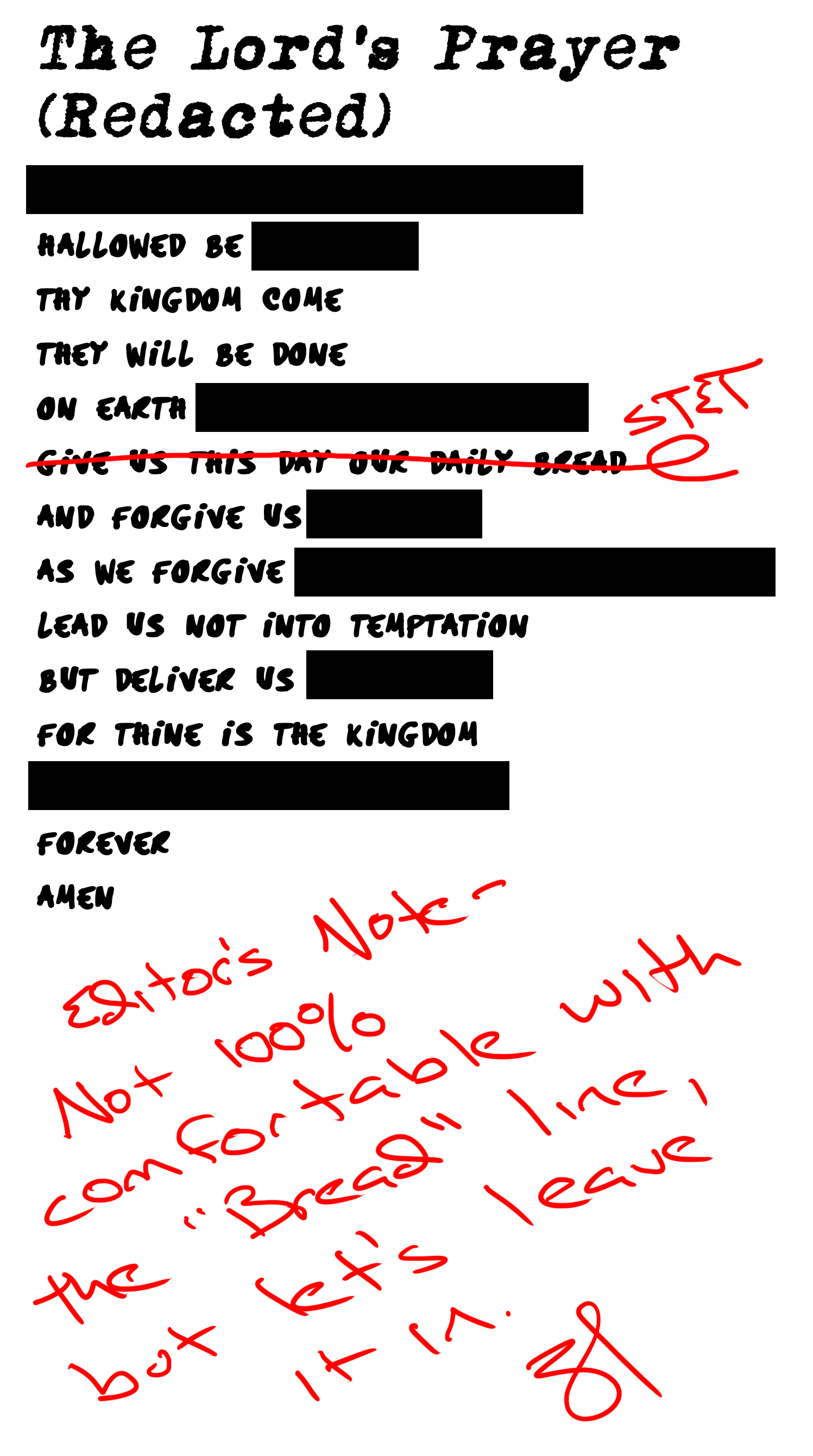 As we explore the prayer, I’m going to be considering those three categories…the language, praying out loud or in unison, and the nature of the prayer as a request.

Here’s where I’m starting from:

I’m just going to list the words in the prayer that I have some trouble with.  Probably don’t need to go into deep discussion on these, because I know I’m not alone.  Just for fun, I did my problematic words as a Wordle. 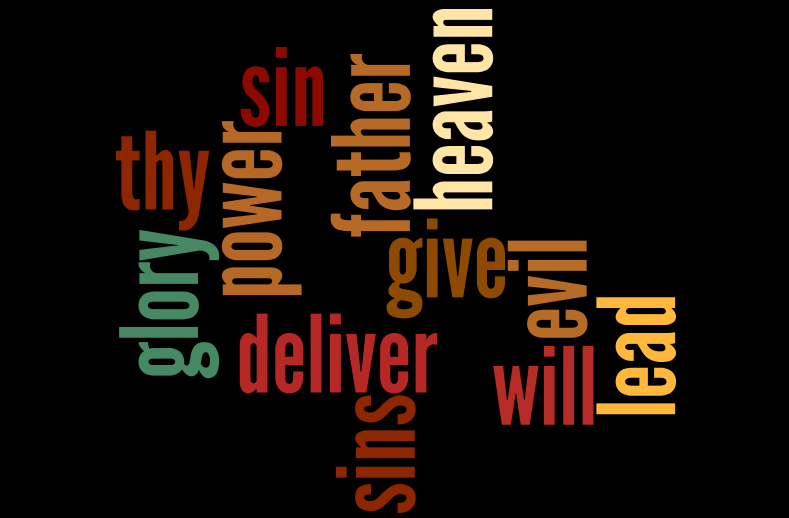 Mostly the words that I have difficulty with assume specific attributes to the divine that don’t really gel with my experience.  I do believe in sin, but am a little worried that the idea that we are somehow naturally sinful doesn’t fit my worldview unless is coupled with also being naturally grace-filled.  OK.  Enough about the words.

2.  Praying in Unison or Praying Out Loud.

In Matthew 6, Jesus spends a lot of time and laying out an argument against being ostentatious in our spiritual practices.  I’m going to paste some of the text here.  The stuff that comes just before the Lord’s Prayer, the prayer itself, and what follows:

5 “And when you pray, do not be like the hypocrites, for they love to pray standing in the synagogues and on the street corners to be seen by others. Truly I tell you, they have received their reward in full. 6 But when you pray, go into your room, close the door and pray to your Father, who is unseen. Then your Father, who sees what is done in secret, will reward you. 7 And when you pray, do not keep on babbling like pagans, for they think they will be heard because of their many words. 8 Do not be like them, for your Father knows what you need before you ask him.

“‘Our Father in heaven, ?hallowed be your name, ?10 your kingdom come, ?your will be done, ?on earth as it is in heaven. ?11 Give us today our daily bread. ?12 And forgive us our debts, ?as we also have forgiven our debtors. ?13 And lead us not into temptation,[a] ?but deliver us from the evil one. [b]’

A quick memo to Matthew:  I have some Pagan friends.  They rarely babble.

Two things in there that jump out at me.  First, he says “This is how you should pray.”  I’m looking forward to learning more about that.  If the interpretation is correct, then perhaps it allows me some wiggle room on my problem words above.  Maybe not a divine dictation but rather a primer.  “Christian Prayer for Dummies.”  I hope so. 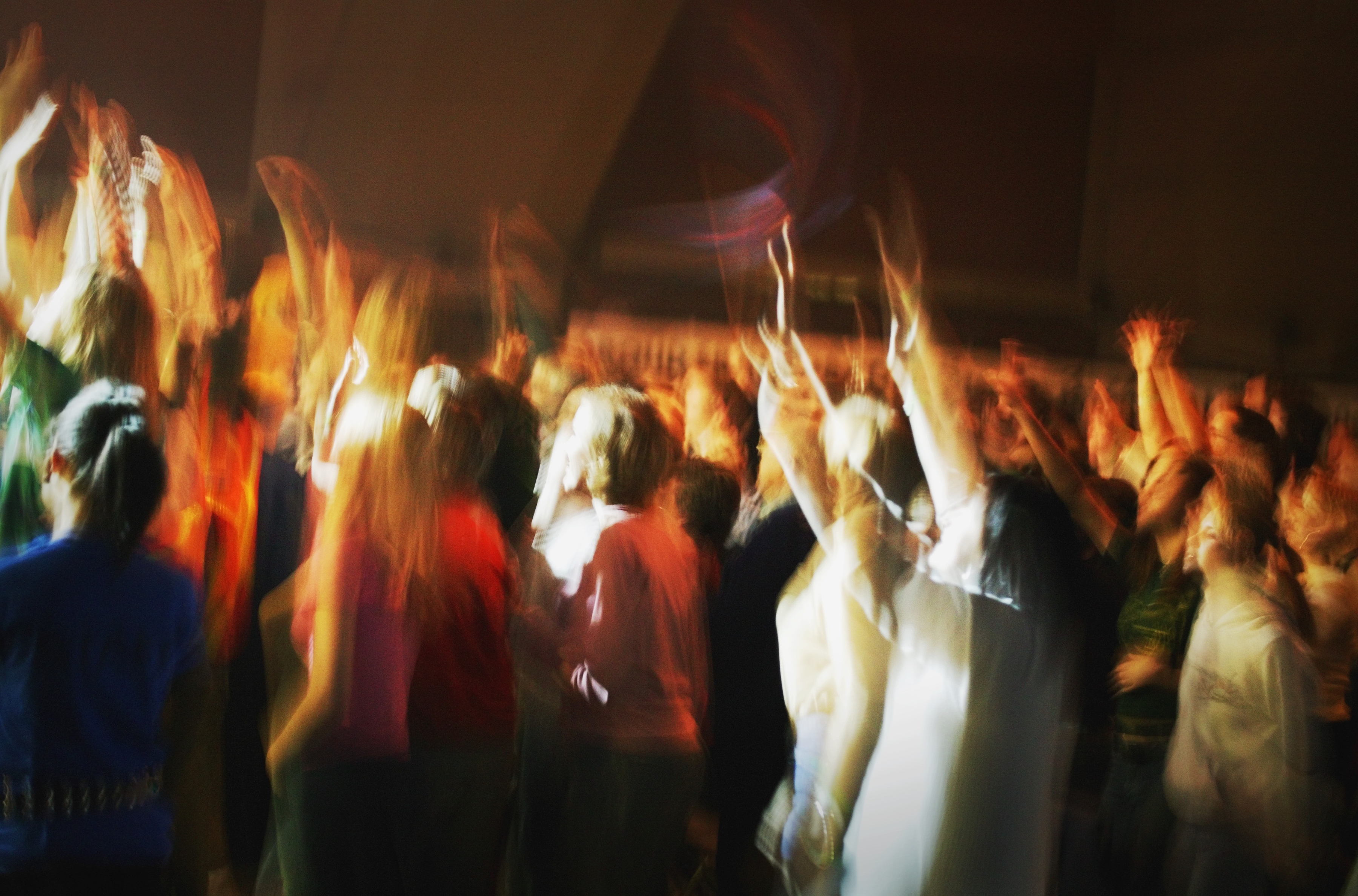 Second is how strident Jesus is in regards to people who make a big show of prayer.  I think it’s easy to slip into being disingenuous.  It seems to me that public prayer and unison prayer both at least can be doorways to that kind of thing.  Even among good and thoughtful people.  So, for me, when we do the Lord’s Prayer, as we inevitably do, I tend to do it in silent, make my amendments (see the redacted version above), and add a nice quiet…spoken…”Amen” at the end.  That’s about the limit of my comfort with praying out loud.  I’d make a lousy Pentecostal.

Before everyone starts getting out the stakes and building the fire, I do like prayer.  I like listening and participating as other people pray for change, I like guided prayer, and I like engaging other people in community, which I think is a form of active prayer.  I’ve had some amazing experiences chanting or in Taizé.  When I pray in a sort of conventional way, it’s usually just “Thank You.”  So my own Book of Common Prayer would be pretty short and sweet.  I don’t typically ask for things.  However, I do pray for grace…so maybe that is cheating just a little.  Mostly I want to live the prayer and I spend hours just listening.  Prayer happens a lot…meditative openness…when I’m in the zone on my mountain bike.

So, while I practice receptivity, the process of asking for something, anything, is really discordant to me.  Mostly because my concept of the divine is not either a force that can be swayed to action, or even a force that ultimately intercedes in ways we understand.  My own metaphor for the divine is all about flow.  You don’t ask the river to change course, you just jump in and do your best.

I can sort of get around the idea of intercessory prayer by being conceptual.  Asking for big-picture stuff like wisdom, tolerance and that sort of thing.  Even then, I wonder why I’m expecting the guy in the sky to provide this all to me when my whole human process is about building those things myself and adding to what has been provided to all of us.  Not that I believe that divinity is ever is absent, but rather recognizing that I don’t really have to ask in the first place.   So, again, it seems to me that “Thank You” is the best response.

So, in the Lord’s Prayer we ask for:

I’m good with all that stuff.  Excellent stuff.  I just believe our plate is already full of grace.  In our wonderful and terrible humanity.  I’m just not sure I believe in a God that wants things.  Because if God wants the Olympic Gold Medal, and can make that happen, God is also in control of the cancer.  It’s an “either/or” argument in my mind, and I try not to ask the divine to make those decisions.  So asking for bread or deliverance or sustenance in a world where surely not everyone will receive those things is problematic for me.  I can only do it in the context of wanting those for everyone and understanding that the things don’t ultimately work that way. 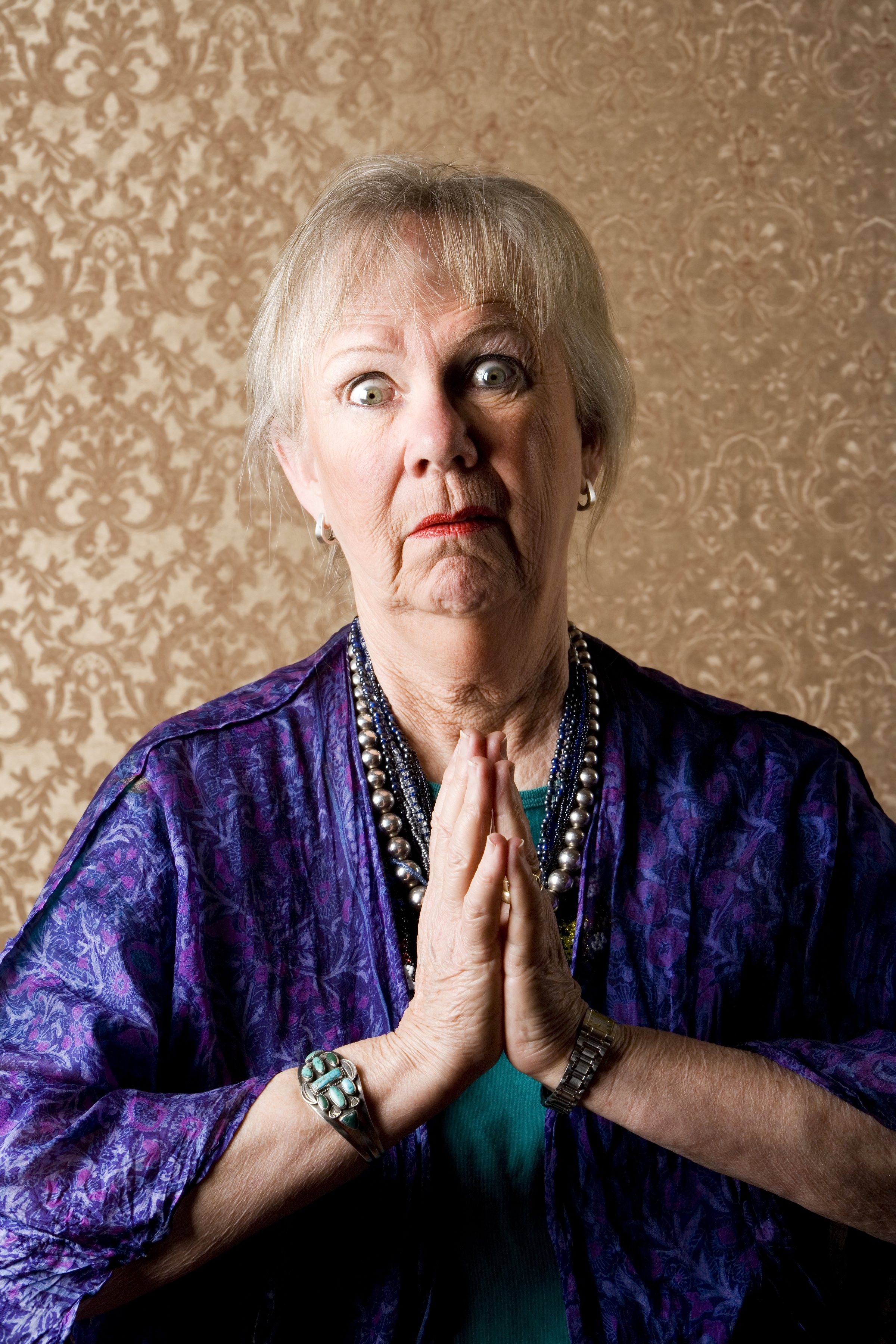 So maybe the whole idea of the Lord’s Prayer, as we often practice it, is just an awkward fit for me?  I’m looking forward to jumping in and learning more about the ancient context and the modern voice.  I think my blogs will mostly be checking in on how my thoughts are being shaped along the way.  I’m coming along with an open mind and a lot of questions.  I hope you are, too.