The Genesis of Love

Which comes first, knowing God or being known by God?  I remember once when I was driving through rural Pennsylvania, the only radio stations I could find were “Christian.” I thought, well what could it hurt to listen for a bit? The minute or two that I stayed tuned in to one of these stations, this is what I heard: “God does not know someone until that person prays to Jesus to come into his heart. Then God knows him. Before someone prays that prayer, accepting Jesus into his heart, God does not, indeed cannot, hear the prayer of any person.” Really? The God of the universe, who created humanity according to God’s own image, cannot hear the prayers of anyone who has not “accepted Jesus as his Lord and Savior”? The Sovereign Creator of all this is has a hearing problem? It just doesn’t seem likely.

I take great comfort in a couple of verses from Galatians chapter 4: Formerly when you did not know God you were enslaved to beings that by nature are not gods. Now, however, that you have come to know God, or rather to be known by God, how can you turn back again to the weak and beggarly elemental spirits. How can you want to be enslaved again? (4:8-9)

It almost sounds like Paul is reminding that Galatians that they delivered themselves from spiritual slavery by taking the steps to know God. But then Paul self-corrects mid-sentence: What a minute! What I meant to say was how this all works is you have come to be known by God. And not just known, but fully known.  This is your salvation: God, who thoroughly knows you, has delivered you from your self-delusions of anonymity. You thought you could hide from God?  You were following after all kinds of things that were in no way ‘gods.’ And you were living in alienation and enslavement.  What God has done in Jesus Christ is wake you up from your stupor, startling you out of your ‘dream-like states.’ You’re not anonymous slaves whose names have been taken from them. You, beloved, are children of equal status, in an amazing household of brothers and sisters. This is what it is to be known by God: one day you wake up to the good news that you are part of an extended family, and you are heirs to the fullness of all that God has to offer! 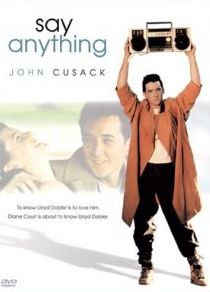 It’s the old chicken and egg conundrum. Which came first, something you did to get God’s attention? Or something God does eternally: march by with the big brass band of grace, playing one sloppy love song after another? Picture God like a cosmic, love-sick John Cusack standing beneath your windowsill with an over-sized boom-box over his head, blaring out, “In Your Eyes” (only it’s not Peter Gabriel’s voice, but the Angel Gabriel’s, you hear). God has, since the beginning of time, been trying to get your attention…to whisper with that still small voice, “I see you. I know you. In your eyes I see the light of a thousand churches.”  Once we’ve been known by this kind of love, why would we ever want to turn back to that amorphous, lack-luster anonymous existence?

I like to re-imagine my car ride through rural Pennsylvania. It goes something like this: I turn on the radio and every station I find plays one song dedication after another. “This one goes out to you. ‘I’ll be Seeing You in All the Old Familiar Places.’ Safe travels.  Don’t forget to call. God.”