The Cost of Awareness

I’m traveling this week visiting family.  Currently we are staying at a motel in Grove City, PA.  There is an empty lot between this hotel and a restaurant that is very clearly a wetland.  Even the untrained eye could tell from the standing water and cattails, but since I serve on my town’s Conservation Commission, I have lots of experience examining delineations of wetland boundaries. 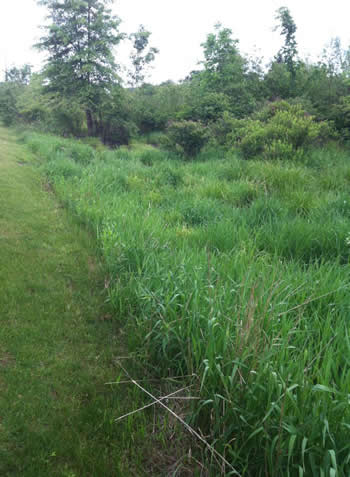 This very straight line between healthy wetland vegetation and neatly trimmed lawn does not occur in nature, trust me.  That means that the motel where I’m staying was most assuredly built on part of that same wetland system.  I don’t see any evidence in the area that there was any replication for the wetlands that were destroyed and to add insult to injury, there is a sign proclaiming the coming of a 120 room hotel in the yet undeveloped parcel.  I’m away from my home state where I know the laws and how to work to stop this greedy destruction of natural resources, so I feel left with only the option of grumpily complaining to anyone who will listen (that you be you, O poor blog reader…doubly cursed if you are my friend on Facebook where I have already been kvetching).  After the ranting that began during this week’s DWB episode, I’m definitely feel like I should fall in line with our cantacerous prophet, Amos.

Amos rebuked the wealthy of his day for exchanging the needy for a pair of sandals.  He was accusing them of using the system to create crushing debts that the poor were incapable of paying off, thus becoming virtually owned by the creditor symbolized by the fact that the sandal they had used to seal the deal was in the hands of creditor to show the validity of the claim.  In a twisted version of the Cinderella tale, the one whom the shoe fits does not become instantly freed from misery but instead guaranteed continued suffering. Crushing debt is certainly once again in favor as the primary tool of those who “play fair” in order to gain power, in the process oppressing many.  If you have ever played Monopoly then you know how this works.  The rules are equally applied to all, but as the game progresses the end becomes inevitable as one person gathers more and more of the assets available.  The game isn’t rigged at the beginning, but at some point the concentration of assets that occurs makes the outcome of one person controlling all the assets becomes unavoidable (short of flipping the board). Whether in Ancient Israel or in modern America, seeing the oppression that is inevitable in the system can be incredibly frustrating.  We all want to live comfortably, and it is not wrong to want to take care of our families, but if we listen at all to the contemporary prophets we know that nearly all of our consumer habits only aid and abet the oppressors not the oppressed.

It is disingenuous to rant while not taking action.  It is also useless to lament that someone should do something when the truth is that each and every one of us is someone and can be that someone who does do something.  Perhaps you’ve heard the story of the guy tossing starfish back into the sea after hundreds had been stranded on a beach at high tide.  Someone comes along and says, “Why are you doing that?  You can’t save them all, what does it matter?”  He picks up another starfish and tosses it back into the sea saying, “It mattered to that one.”  And so it was that my resolve was tested as I considered how to replace my very worn out sneakers. 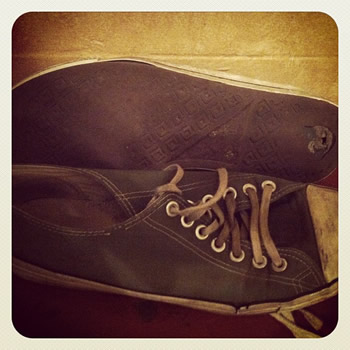 I had seen genuine Converse Chuck Taylor’s on sale at a discount store and was tempted.  I knew that the huge retailer that Eric “didn’t” mention in this week’s episode had knock offs that were dirt cheap.  I also knew that while Converse may not be suspect in its business practices (but do I really know?) that the huge unnamed retailer surely was suspect in its practices that led to cheap shoes (and everything else).  I couldn’t erase from my memory the news of more than a thousand people dying in Bangladesh just so we can have cheap shirts.  So I resolutely held out for a more holy way to replace my whole-y shoes.  So I went to the web site that I bought the shoes from in the first place, the Autonomie Project.  To my happy surprise, I found that the vegan, fair-trade, sweatshop-free, organic sneakers were on sale!  It was tough finding a pair in my size, so my preferred green will become a snazzy red this time around.  Yeah, it was a small act (one that you  can easily copy by following the link) but it was something I could do.  Isn’t that what we are to do with our power, particularly the power to choose?  I may not be able to stop all the selling of the poor for a pair of sandals, but I can make at least a small difference with one pair of shoes.