Our third grandchild is on her way, ready to enter the world any day now. Through the wonders of modern technology we are able to follow the progress from 500 mills away. That same social media brings reports of all the aches and pains of pregnancy so we are not spared the expected 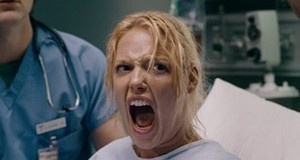 and justifiable kvetching of the expectant mother. And, of course, that is to say nothing about labor and delivery. When our first child was born, my wife was in labor for 36 hours before our son was delivered by caesarian section. More than once along the way my wife declared that she didn’t want to do this anymore. And who could blame her? This whole pregnancy, labor, and childbirth thing seems like cruel and unusual punishment. But the human race keeps choosing to endure it because the reward is so precious.

Sometimes in the midst of struggle the best or only way through is to keep your eyes on the prize. Joseph certainly had plenty of reasons to stop believing in the promises of God. He was sold into slavery by his own brothers. He was stalked by a sexual predator. He was falsely accused and jailed without trial. But in the midst of his real life soap opera where he was always the victim, this dreamer continued to dream. He had known the blessings of a doting father who showed his favoritism with that amazing technicolor dream coat. He probably wanted for nothing and had every reason to dream of a tomorrow that looked a lot like his yesterdays. So even when the night was darkest he chose to accept the blessing of the dark which makes seeing the stars possible. He might even have recalled God’s words to his great-grandfather, Abraham, that his descendants would number more than those stars and continued to believe.

Perhaps Joseph counted on a synergy among all the events of his life, even the bad ones. He might have believed that they were all somehow working together for good. the Apostle Paul definitely believed that since he said so to the church in Rome. Romans 8:28 tells us not that good things happen if we just believe in God, rather that all things work together for good for those who love God and accept the challenge to follow God’s call for their lives. The Greek word for that working together is synergy.

Do you dare to hold on tight in the midst of struggle trusting in a synergy of events that will bring about unseen blessing? In this world where too many are victims of human trafficking, sexual predators, and unjust imprisonments we dare not doubt the dream of God’s blessing, if only for their sake.