I am fascinated by the work of Andy Goldsworthy.

If you’re not familiar with his work, take four minutes to and watch this video.  It’s excerpted from the film “Rivers and Tides.”

Andy Goldsworthy from Rivers and Tides

I first came across Goldsworthy’s sculpture through his photography.  A set of 5 images of a sort of pinecone-shaped pile of rocks being overtaken slowly in a tide.  It was haunting.  A study in impermanence.  A reminder that our work, whatever it is, is fleeting.  The scene in the film link above of the wooden sort of hogan shape being washed away has that same sense.

Funny thing is…the same thing will eventually happen to Michelangelo’s David,  Warhol’s tomato soup cans, the Very Large Array, Hockney’s swimming pools, all of Edith Head’s costumes, and even the the Cathedral of St. Sophia.  Probably even the local Walmart will one day be reduced to dust and ashes.  This too shall pass.  Goldsworthy just doesn’t fight it.  He’s brave.  He puts his art in the path of its destruction.  Ice into the fire.

Let’s just get this out of the way right now.  It’s coming.  Always.  It’s here.  Always.  The Kingdom.  Don’t really have to ask.  Talk about emergence; the Kingdom is a constant revelation of everything all at once.  And it’s good.  Really good.  But it’s not perfect.  Just really, really good.

If it was perfect, we would be useless.  The profane nature of the sacred Kingdom is what keeps us all ticking.  It’s the work to be done.

I think I like Goldsworthy’s work because my dominant metaphor for life is flow.  I read Mihaly Csikszentmihalyi’ s book Flow several years ago and it just sort of clicked in.  Been living with the concept ever since. And I think of that flow as a wide, deep river.  I was adding some thoughts to Chuck’s blog and this idea of flow just came…um…pouring out.  When I realize that life is flow – it might be something else for you, but I bet the metaphor will hold up – I have four choices:

1.  Sit on the banks for a while. We need to do that sometimes.

2.  Get in and find a foothold. Rage against the machine of our nature.  Shake a fist at the river and refuse to give way.  Like one of Goldsworthy’s sculptures, we know how that will end.  Even so, I think sometimes we need to stand against the flow for a while.  We need to not be pleased that the Kingdom isn’t perfect and we need to dig in.  Ultimately, though, we’ll have to give it up and let go.

3.  Swim upstream. Just basically a bad idea.  No foothold, just a lot of wasted effort.  Maybe this is an act of inhumane kindness (got that from Eric and from Phyllis Tickle).  Maybe we are doing the wrong good?  Fighting the flow, even for good reasons, but not living into our purpose.  For me that might be allowing myself to do good work that ultimately doesn’t feed my soul.  Souls die when they are doing the wrong work.

4.  Get in the flow. In the Bruce Springsteen song, Reason to Believe, he uses the best word ever to describe the flow of a river.  Effortless.  I’ve heard Marcus Borg use the same word to describe doing one’s own right work.  Being in the groove.  Eric calls it the sweet spot.  For me, it’s a river.  Or maybe the Kingdom, realized in a sort of personal way. 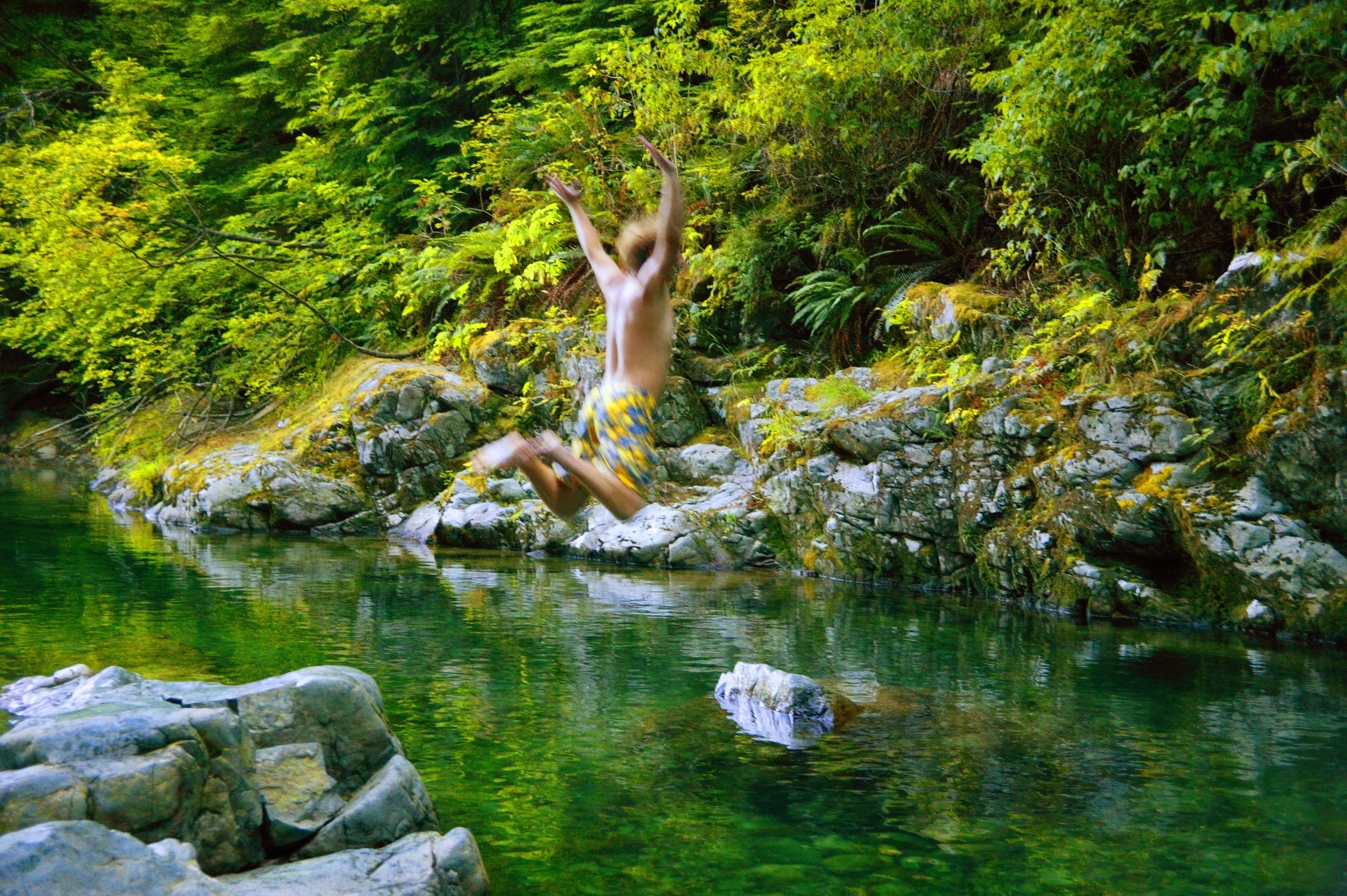 My sense of the divine just doesn’t allow me to ask for things the same way I might ask for a cappuccino.  I can’t ask the river to change one molecule for me.  Flow is flow and the river is headed somewhere with me or without me.   In Jo Hilder’s blog, she ends with this response to the divine: “I believe that you love me. I trust you. I’ll do what I need to do from this end. Please, let’s have it your way.”  That’s exactly how I feel about the river of our life.  That’s what I want to ask.  Thy Kingdom come…  If there’s going to be a question mark, it’s aimed at me not at my idea of God.  What can I do to be a good shepherd of the Kingdom right here, right now.

What I want is what has been intended for me.  Not in a sort of predestined way that takes the choice out of my grasp, but in a way that understands deeply that the Kingdom works best when all the parts are humming.  The Kingdom works best when I and everyone else are leaving the safety of the shores and getting in deep.  We are playing our role.  Doing our thing.  It will probably never happen, precisely, but we get glimpses of it all the time and it is possible.  When empires or religions try to turn us away from our purpose, they conspire to hide that possibility.

Like one of Goldsworthy’s constructions, we are here for a time.  A moment?  An eternity?  Who knows?  But a time is enough.  They Kingdom has come.  What do we plan to do about it?