A few weeks ago my wife Anna and I were traveling back from San Diego to Tucson by car.  In El Centro, small agricultural city in the desert along Highway 8, we stopped at a grocery store to grab some food and some drinks for the five or so hours ahead of us on the road.  This particular type of store is a favorite for us.  The chain caters to the Hispanic population.  In addition to standard Cheerios and Pop-Tarts, they offer all sorts of fresh and packaged ingredients for Mexican cooking.  They tend to be less expensive than the big name grocery stores.  You won’t find them in affluent neighborhoods and they can be a little rough around the edges.

I was wearing a new pair of shoes that I purchased in San Diego.  In fact, I liked the shoes so much, I had gone back to the store and bought a second pair a few days after the first.  They weren’t Gucci, but the also weren’t cheap.

There was a family in front of me in line.  Hispanic man, woman and a couple kids.  They were paying with food coupons – latter day food stamps – and it was taking a long time.  The woman behind the cash register had to check certain items in a reference book to see if they were on the list and even consult with another cashier a couple times.   The family’s purchases had to be segregated and the coupons had to be fed individually into a machine that read them and credited the purchase.

That’s all there is to the story.  Me, in my new shoes, waiting in line while a family worked through the process of redeeming their food coupons and collecting their groceries.

Did I mention that I was annoyed?  My time is important to me.  I was ready to get back on the road.  And, I have to admit, the food coupons were kind of bugging me.  No one seemed too interested in keeping the line moving, and the cashier was treating the family politely, not rushing them through.  Everyone was cheerful and pleasant.  Except me.  Then I looked at my shoes and remembered something my friend and client Kristine said to me a few months ago.

Before I go there, let me just get this out.  I’m a bleeding heart liberal.  I’m not afraid of the title.  I didn’t ask for it, but I’m be happy to wear it and when someone puts it on me as a pejorative, I wear it with some amount of pride.  My heart does hurt for all kinds of people in all kinds of situations and I try to do what I can to help.  I’m best able to bleed for people who live far away, it seems.  I try to live a life of compassion.  Except, apparently, when I’m being slowed down in the line at the grocery store.  In that case I can be pretty judgmental.

I’ve been on the corporate fast-track in the media world.  I’ve been a partner, a manager, and a director.  I’ve owned a company.  I’ve been flown around to direct videos and photo shoots.  I’ve had the privilege, because I could afford it, to decide I wanted off that train and to start a new life that appeals to my higher purpose.  I try to be helpful.  I try to do the right thing.  However, there’s a part of me that is now, and will forever be, entitled.   A part of me, that in my not so attractive states of fatigue, anxiety, or annoyance will shift into judgment mode.  A part of me that has learned that the poor are poor due to moral defect rather than social or political situations.  It’s their fault.

My shoes again.  I looked at my shoes.  And I remembered something.

I volunteered to go out with a group in Tucson that was part of a nationwide effort to get medically-vulnerable homeless people into housing.  I’ve shared thoughts and photos here before, so I’ll provide a link and not so much information in this blog.  Check it out here if you are interested.

I asked Kristine what the agency wanted to achieve with my photos.  What I should try to convey.  She said, “We want to show that these people are people.”

These people are people.

Perhaps the family in line in front of me was malingering on food coupons.  I suppose that is one possibility.  Or, it could be that the adults worked the local fields picking lettuce in the heat of the day.  I really have no idea.  One thing I do know, they are people.  They experience joy and pain and have things they want for their lives.  Like me.

I am sharing a photo a week as we explore the latest Darkwood Brew series on the Psalms.  If you want to get technical, this week I’m cheating.  The photo below left is mine.  It’s from that trip to the Tucson desert to meet people experiencing homelessness.  The wooden structure is the shelter this woman, her husband and two sons live in.  The photo on the right is a stock image, not one of mine.  I may be cheating, but at least I’m honest about it.  My rules, anyway.

Divinity as blindness?  I see all the differences.  I wonder if the divine sees any. 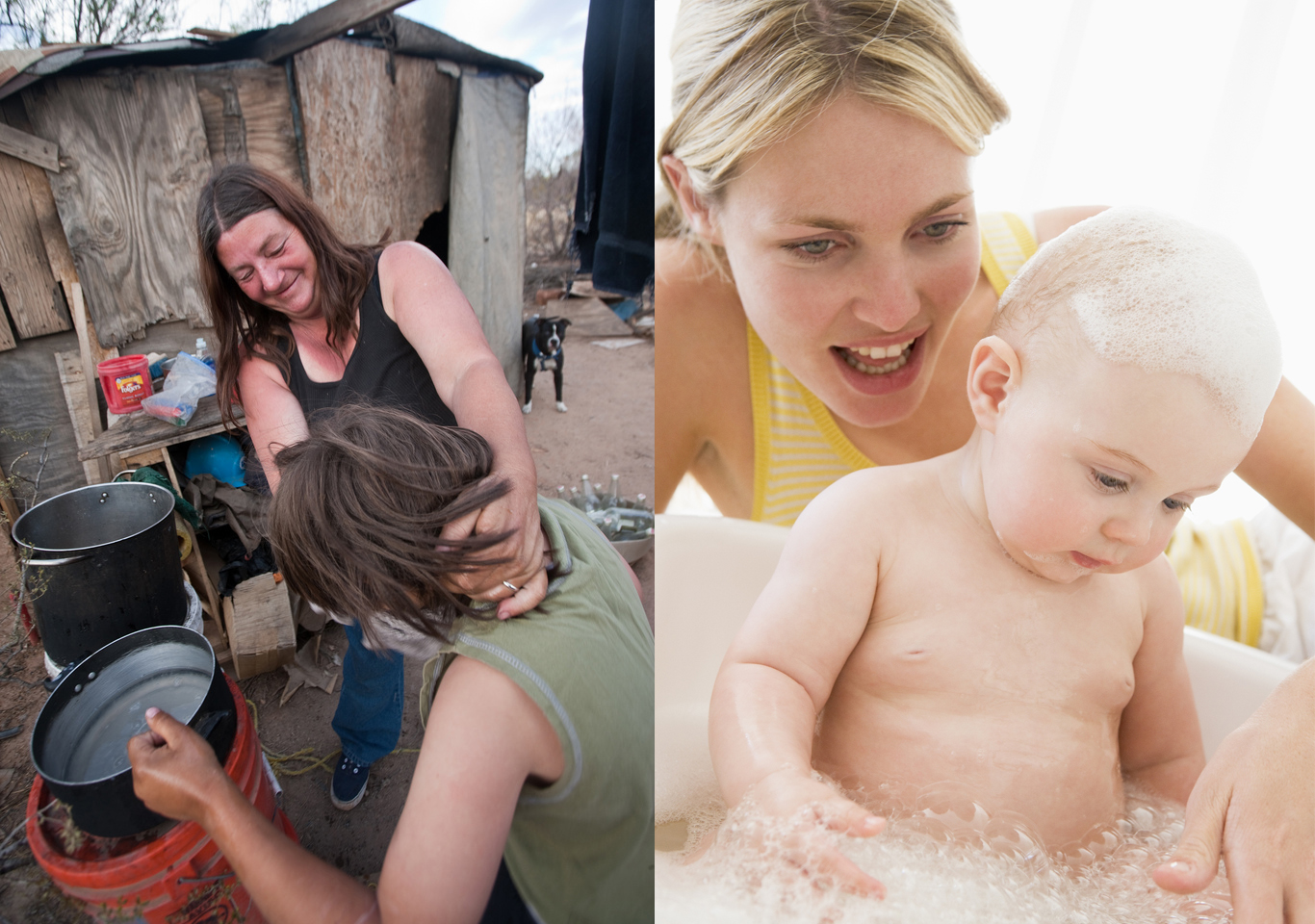