Of Prepositions. And Adverbs. And Salvation. With Pictures.

I love language. This is a good thing for a writer, and a Christian, because language matters as much to one way of life as it does to the other. The text we’re studying today comes from the Gospel of John, and is probably the most frequently quoted text in the Bible, at least among Christians trying to convince others that they hold the only key to heaven. I read John 14:1-7:

“Do not let your hearts be troubled. You believe in God; believe also in me. My Father’s house has many rooms; if that were not so, would I have told you that I am going there to prepare a place for you? And if I go and prepare a place for you, I will come back and take you to be with me that you also may be where I am. You know the way to the place where I am going.”

Thomas said to him, “Lord, we don’t know where you are going, so how can we know the way?”

Jesus answered, “I am the way and the truth and the life. No one comes to the Father except through me. If you really know me, you will know my Father as well. From now on, you do know him and have seen him.”

Questions. I have them. Some pertain to the text, others are caught up in the general cultural assumptions woven through what it means to be a Christian. Just so you get a sense of what a crowded and frequently crazy place my head is, I’ve written down a few of them.

1. Does the text actually say that Jesus is going to heaven? He says he goes to prepare a place for us in his Father’s house. Does he mean our interpretation of heaven? How do we know that? If he did, why didn’t he say so? If not, when and why did we begin to link Jesus to “heaven” and “heaven” to salvation?
2. Jesus says “And you know the way to the place where I am going.” Putting aside the “where”, what’s the way to the place? Is it a belief system? Is it a way of life? A road, like Route 66, or the Via Dolorosa that ends in a cross? What is this way?
3. Thomas says “we do not know where you are going. How can we know the way?” and boy am I glad to know I’m not the only one who’s confused. If people who were THERE, in the ROOM, didn’t understand, hearing the words directly from the horse’s mouth, then how can we be so sure we do?
4. And Jesus says, ‘I am the way, the truth, and the life. No one comes to the Father except through me.”

Let’s talk language. The first part of #4 is a metaphor, which is a powerful and much-neglected component of language. A metaphor, for those of you who promptly forgot everything you learned in 10th grade English, is a “figure of speech in which a word or phrase is applied to an object or action to which it is not literally applicable.” (not literally applicable. Think on that for a while, but don’t try to find the right answer, or even an answer, because that’s not what metaphors are about. They’re about comparing two dissimilar things and opening your mind to a new way of seeing those things. See also: poetry.)

The second part is a statement that turns on a word that can be either a preposition, or an adverb, depending on how it’s used in the sentence. Before you protest that prepositions and adverbs are dinky little words that don’t mean much because they’re not big, powerful VERBS or clear, identifiable NOUNS, just note that there’s a big difference between your two-year-old being “in” the house or being “on” the house. One means you can mow the lawn with Rhianna blasting into your ears. The other is cause for panicked calls to 911 and your neighbor with the extension ladder. In this case it’s used as an adverb, which are relational words, and they matter when we’re talking about our relation to and with God.

Let’s also remember that John didn’t write in English. He wrote in Greek, a language I don’t know, so I’m working with someone else’s translation. Tricky, that, because I’m trying to understand Jesus’s words as written down about seventy years after his death by someone speaking another language and living in another time and culture, then translated into English. So, what does it mean to go somewhere through another person?

How many different ways can we use “through” in a sentence? Using just a few of the definitions (copied and pasted from whatever dictionary is embedded in my Mac), we can have some fun with what it means to come to God through Jesus:
o    moving in one side and out of the other side of (an opening, channel, or location) : (coming to God through Jesus by transitioning from one space to another (earth to heaven), or one way of life to another.)
o    moving around or from one side to the other within (a crowd or group) : (Coming to God through Jesus by using his teachings to weave through obstacles like sin, or a crowd of people offering false teachings. I don’t mean the Buddha or Confucius or any of the Hindu teachers. I mean Abercrombie and Fitch, or Audi, or the people who sell Arby’s as “good mood food” which might be a metaphor, or perhaps just a blatant lie.)
o    so as to be perceived from the other side of (an intervening obstacle) : (Coming to God by using Jesus as the lens through which we see God, and if you’ve read any parables, you’ll know that even Jesus didn’t teach like he was clear, flawless glass. Let anyone who has ears to hear, listen!)
o    expressing the position or location of something beyond or at the far end of (an opening or an obstacle) : (Most frequently understood definition of Jesus and through. We walk through Jesus like he’s a gate. Well…what does THAT mean? And is, perhaps, the key word “walk”?)
o    continuing in time toward completion of (a process or period) : (Lengthy process, that “through”. Not a single moment in your life, but an ongoing process over time that indicates transformation, growth.
o    so as to be connected by telephone : (My personal favorite: Jesus as iPhone).

Now that I’ve ensured I’ll never get invited to another casual dinner party, let’s explore, which is what those of us who went on the Turkey Trip 2012 in April did. We walked in the footsteps of Paul and as we did we explored Paul’s vision of what it meant to be a Christian in the early years after Jesus’s death. Well, we rode a very comfortable bus, but we had two weeks, not two years. We toured Turkey like we were shot out of a cannon, and it was the most powerful, transformative experience of immersion in the Spirit in my life. I can’t imagine how the Spirit worked on Paul as he walked and was beaten, walked and was stoned, walked and talked to his companions and fellow believers, seeking the Way in the risen Christ.

My experience, having walked where Paul walked, is that coming to God through Jesus can’t possibly be about a confining belief that makes Jesus smaller, not bigger, or easier to understand, not harder. It’s about an inner journey that opens your interior world like a boat on the ocean, creating a sense of space and love and joy. Traveling through Turkey gave me a sense of the vast territory and grievous obstacles Paul faced, and imbued meaning into his words and his passionate commitment to the risen Christ as one body in which we are all members. Below is one of my favorite pictures from the trip (taken by Scott Griessel). 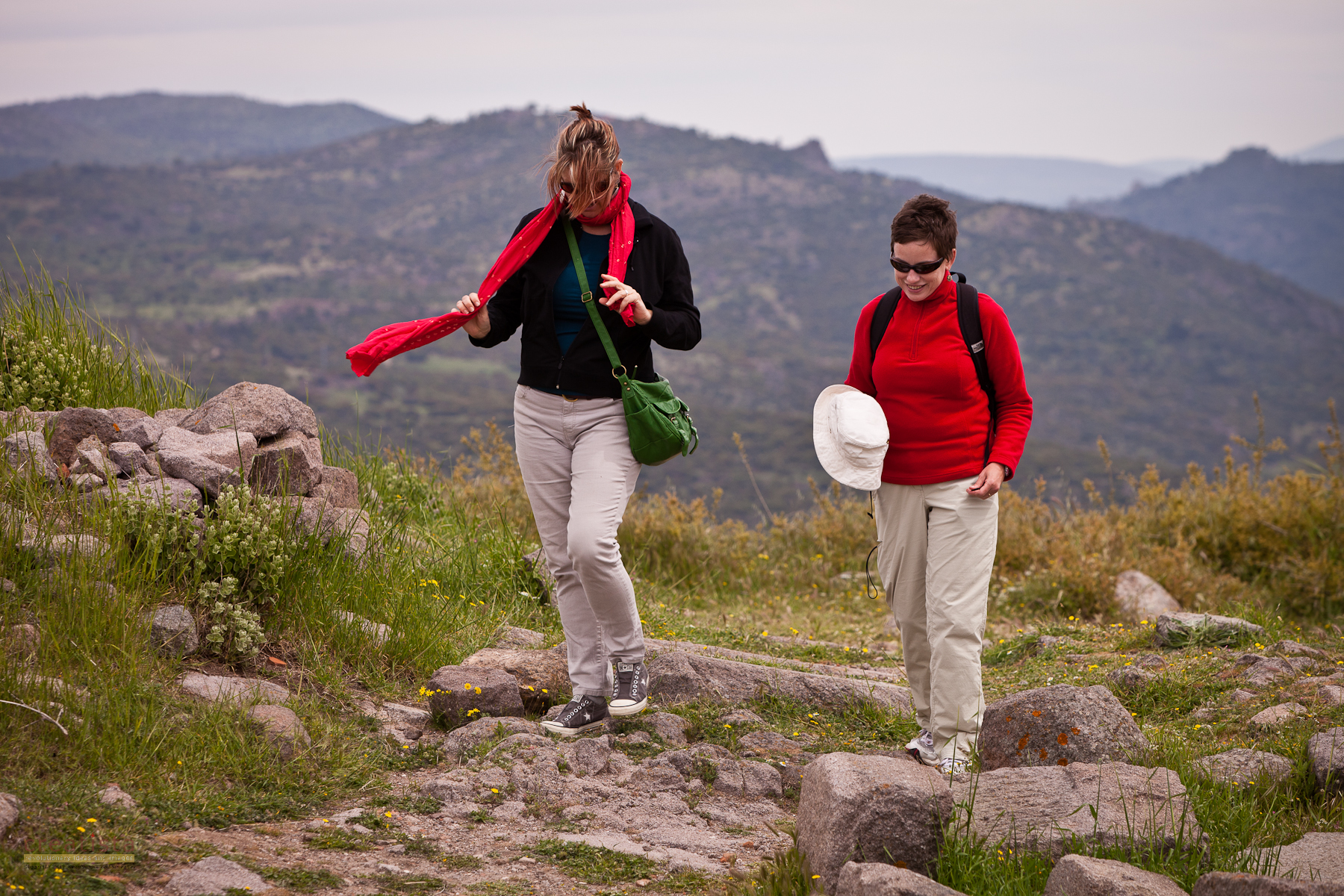 That’s me, in the red pullover, and Anna Griessel, wife of Darkwood Brew producer and blogger Scott Griessel, in the playful red scarf. We’re leaving Assos, talking over what we’ve just seen.

That’s what it means to come to God through Jesus. Salvation hinges on walking the way, like Paul did, talking with companions, like Paul did, his life lived to the fullest while on the move. This is a vast, complicated blessing, one we’ll immerse ourselves in for the next two years as we investigate the series By This Way of Life. Let’s not make it simple and cheat ourselves out of the opportunity to live not only the questions but the mystery that is the risen Christ.