Occupy Oakland Strike: Change and The Power of Nonviolence 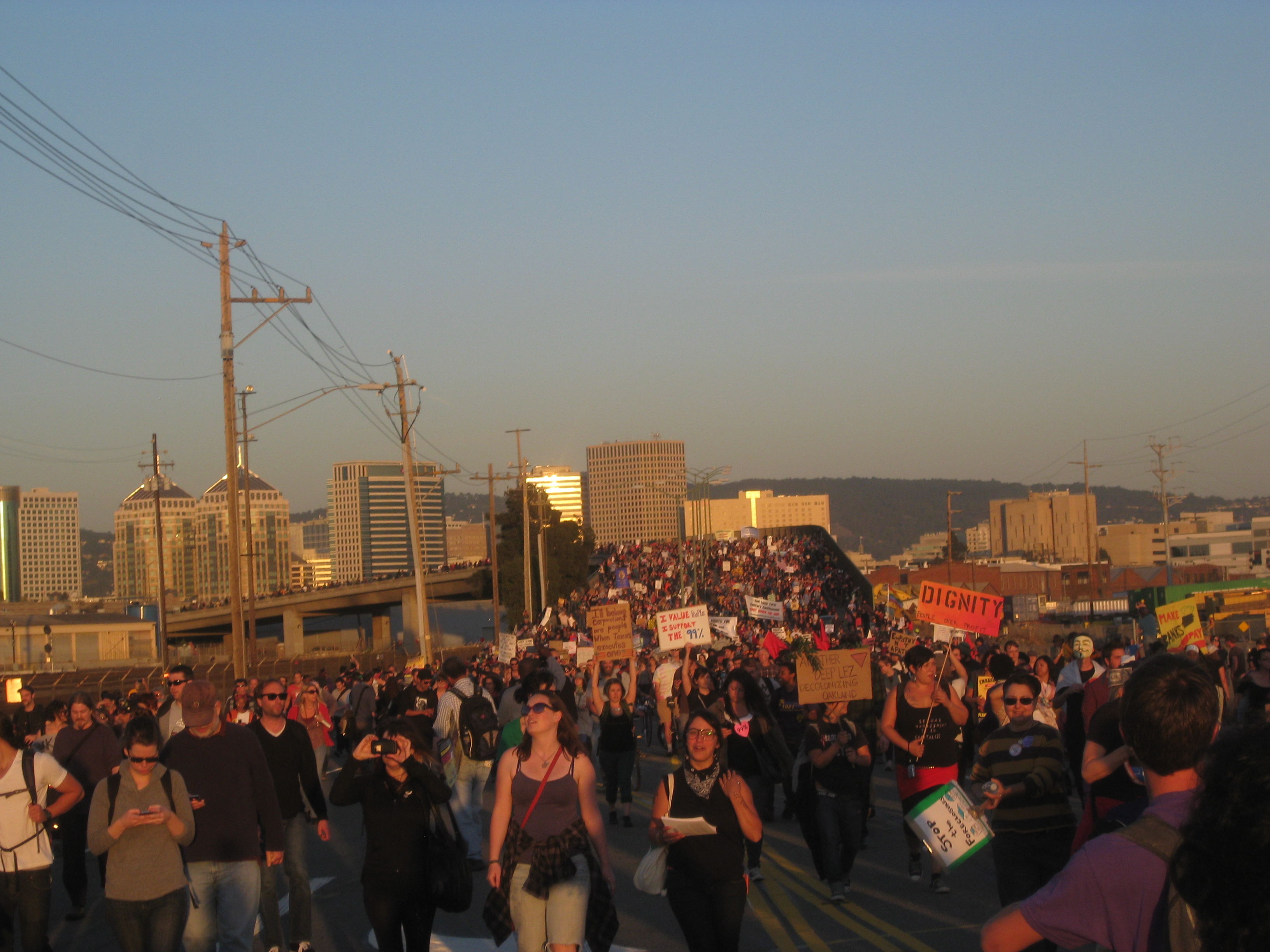 Last night I marched with thousands of people of all ages, ethnicities, and classes to the Port of Oakland. People were chanting, smiling, speaking about nonviolence, talking about change, playing Michael Jackson on stereo, and the list continues. What was most powerful for me was not only the march, which symbolized the need for social and economic equality in our world, but also the spirit of nonviolence that feed so many of us. There was one particular incident where violence could have been a reality. There were thousands of us standing in front of the Port of Oakland fence. Around 7:40 pm or so an employee of the port tried to drive through the mass of people to get to his job. He was driving slow, but seemed somewhat forceful with his driving. Within seconds people started to kick his truck, scream at him, someone even jumped on his truck looking as if he was going to kick the windshield in. However, this violence was stopped within seconds. How? As soon as this happened a powerful chant came from the crowd, “NONVIOLENCE, NONVIOLENCE, NONVIOLENCE.” Though initially our voices seemed low, we were joined by large numbers who believed in the same. The “NONVIOLENCE, NONVIOLENCE” chant turned to chanting, “PEACEFUL, PEACEFUL.” Many of us held up peace signs. Within seconds the majority of us was chanting and standing for peace. The angered man jumped off the truck and protestors stopped kicking the man’s truck. A nonviolent protestor led the man and his truck out of the mass of people. My classmate looked at me and noted that the man who lead the truck driver was Oscar Grant’s relative who he saw speak in Berkeley once. Oscar Grant was a young man killed by the BART police in 2009. This witness was extremely powerful for me. There is power in speaking up for peace when violence surrounds us. Speaking up can literally shift the energy and change a particularly harmful situation.

The media seems to focus so much on the negative events happening in the Occupy movement, but yesterday I was inspired. I saw first hand the power of nonviolent protest in action within this movement. I observed a relative of Oscar Grant extend compassion to a man who could have potentially harmed him. I drove by school children standing next to their school with their handmade signs chanting in solidarity: “We are the 99%!” I’ve heard the testimonies of many and my heart, mind, and soul is moved to compassion and action. Last night on Occupy Oakland Live-U Stream the brother facilitating the live footage spoke to the police directly after force was expressed on occupiers. He noted, “It is the love and compassion of the fellow protestors that I will remember from this movement. It is not the violence and brutality of the police (or others). Love and compassion will always win over violence and brutality.”

After leaving the port I went back to the Occupy Oakland encampment at Oscar Grant Plaza. I left around 9:30 pm, but followed the reports of violence via live streaming. I had the same sentiments as my friend Sam. He notes, “Reading the news-reports from the middle of the night, it saddens me to hear of what took place. It also convinces me of the importance of continued involvement in this growing movement – the importance of maintaining strong voices for the methods of non-violence, and being open to listening to the anger and the frustration of those who feel compelled to use more violent means.”