My Letter to the Galatians 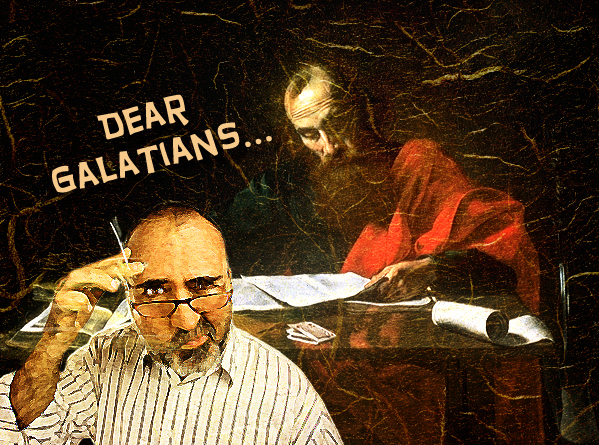 I hope this letter finds you well after your drubbing at the hands of the founder of the church.  Sorry I haven’t written more.  I wanted to follow up on Paul’s missive to you.  I know it’s been a couple centuries.  Mea cupla.

I know Paul can be sort of a downer.  It’s really just his way…don’t take it personally.  Oh, wait, yes, I guess you ought to take it personally.  He was pretty riled up when he wrote that.  But then, what were you thinking?  I know you’re new to this whole Christianity thing (and who isn’t).  And, of course, your heritage is what makes you so interesting. Like that’s a bad thing??  I also know you’ve felt pretty swayed by that whole BCE way of thinking.  Ask someone to explain BCE to you some time.  Anyway, I’m not surprised that you fell into that “law” debate.  It is kind of seductive to know exactly what you should and shouldn’t do in any given situation.  However, it is rather pivotal to the faith that you rethink that.  Metanoia.  Yes, I am showing off what I learned in the Beatitudes series.  What of it?  In current parlance we would just say “Dude!” (male or female) and slap you on the side of the head.

I suppose laws can be a good thing if they point you towards some sort of ethical/moral pathway.  But what I think gave Paul fits (something he’s rather good at) is when the law subverts a deeper core message.  I know he even struggles with that purity stuff himself, so he can turn that inward sometimes, too.  However, he does seem to fall on the side of being kind, compassionate and loving on his better days.  Try to catch him on those days.

So, Galatians here’s what I want to say from almost 2,000 years in the future.  And no, we don’t have cars that can fly yet.  Big disappointment.  OK.  What I want to say is that you are fighting the same good fight that we are.  So I suppose 2,000 years from my time if we manage to keep ourselves and the planet alive we’ll still be working it out.  We don’t agree on anything.  We’ve had a couple thousand years of not watching people get engulfed in flames or turn into pillars of salt to realize the law stuff may have been a tad bit over-emphasized back in the day.

There’s a lot of that stuff we just kind of skip over.  It is kind of fun to try.  Check out The Year of Living Biblically on your Kindles.  AJ Jacobs spent a year trying to follow all the rules of the Bible.  He grew up without any faith…and, as he describes himself, “am Jewish in the same way that the Olive Garden is Italian.”  I know, you all think Olive Gardens are Greek and the idea of Italy is still a ways off.  Anyway, he takes the idea of following the rules to the extreme…and shares the results. 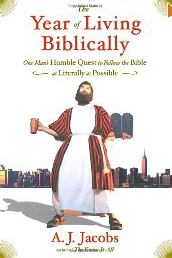 My Year of Living Biblically Check out this 17-minute talk by the author.

“Speaking at the most recent EG conference, author, philosopher, prankster and journalist A.J. Jacobs talks about the year he spent living biblically — following the rules in the Bible as literally as possible.”

If that isn’t enough to make you at least think twice about ultra-legalism in the mosaic sense, here’s something else that may affect your decision.  I have it on pretty sound evidence that Jesus won’t be coming back in a physical way in your lifetime.  You couldn’t know that.  Paul couldn’t know that.  So, I think you might want to consider how you treat yourselves and each other in the act of being Jesus’ sort of proxy-people in Galatia.  That might start a nice trend.

Good luck with the new church start.  Please try to keep your committees to a minimum and, for the love of the divine, no jello salad at the potlucks.  That should be a law.