One of the ironies of my avocation of birdwatching is that most hardcore birders will not list sight as the most critical sense needed to identify a bird to species.  In the vast majority of cases, hearing is the reason a bird is noticed and the way it is identified.  Even so, there has been no movement to rename the hobby bird listening.

In the reverse of that irony, the exercise for Wave 4 in [amazon_link id=”1557258716″ target=”_blank” container=”” container_class=”” ]Drawn In: A Creative Process for Artists, Activists, and Jesus Followers [/amazon_link] encourages taking a listening walk and then looking at something. Troy tells of a photographer who, when looking to capture an image, will ask the object to tell him what it wants to say.  Getting beyond the worry of hearing actual voices, this way of observing that involves paying attention in different ways might just be the sort of thing that Jesus meant when he said “let them hear  who have ears to hear.” 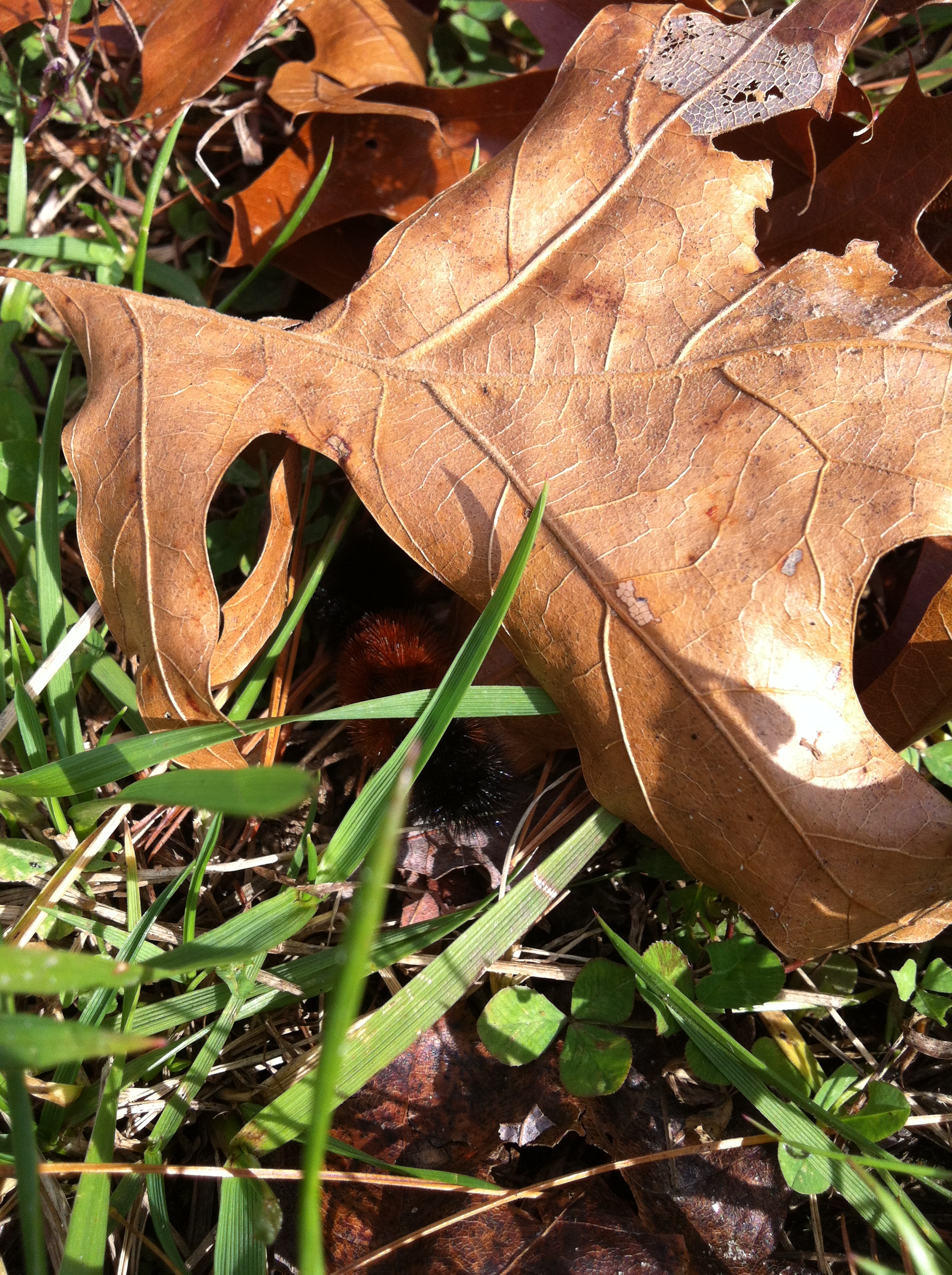 When I did the listening walk exercise last week I found myself paying attention to a wooly bear.  Perhaps you know this caterpillar as a predictor of the severity of the impending winter based on the amount of black that is shows.  That is one way of “listening” that I don’t encourage.  I’ve never seen a consistent relationship between the color of wooly bears and the severity of winter, let alone any consistency in any year’s crop of wooly bears in amount of black.  That sort of observation seems more like projection, i.e. hearing what you want to hear, depending on whether you are hoping for a mild or severe winter.  No, the listening I did with this wooly bear was to watch it scurry across the stone lined path at what must be a tremendous speed for a creature so small.  When it reached the grass it slowed down.  It slowed even more as it approached a leaf.  Then it positioned itself such that the color of the leaf and the shadows it cast created a perfect camouflage for the caterpillar.  So good, in fact, that as I snapped the picture, I wasn’t sure that I had the caterpillar in frame.  Eventually I used a flash to be sure.  When I reviewed the pictures I was able to see the wooly bear snuggled in its place of safety.

So I listened to brother Wooly Bear (or perhaps sister, I couldn’t tell) and he told me a tale about the need to rush from places where you don’t belong to settle in where you do.  In his wisdom he was speaking to me about the creative wave that follows listening, reintegration.  He was in a place of risk as he crossed the path, exposed to the soles of shoes and the tires of bikes.  But he was able to find his proper location near that leaf, where he was safe. When he was among the things where he belonged, he became as one with them.  The play of colors that masked his presence made him safe in that time and place.

Listening requires being open to learning.  During the episode, Troy spoke of the documentary about the art of Andy Goldsworthy called Rivers and Tides.  Goldsworthy speaks of his art in terms of listening to and learning from his medium.  In his case, the medium always comes from the natural world.  In the clip below, he is working with stones.  The sculpture that collapses is not the first one he has attempted.  The film shows that he has done this before.  But this time is different.  This time the rocks are telling him to change what he is doing.  And so he must.  Watch and enjoy the clip to experience vicariously this special form of listening.