Jesus' biggest temptation? Doing (the wrong) good. And yours?

Ask not what the world needs.  Ask what makes you come alive…then go do it.

Because what the world needs is people who have come alive.

When was the last time you were seriously tempted to do something overtly sinister or evil?  I’m not talking about little things, like taking more than your fair share of dessert, or gossiping a little more than you should about a coworker.  And, of course, no one is immune to fantasies of doing great evil, such as throwing your boss out the window after he turns you down for a promotion.  Yet if you haven’t actually thrown your boss out the window lately, or done more than entertain brief fantasies of such things, then doing great evil is probably not a significant temptation, as is true for most of us.  Chances are,  you’re trying to do too much good for your own good. Or you’re doing the wrong good.  Or you are doing the right good at the wrong time.

If you wrestle with the temptation to do the wrong good yourself, perhaps you will find comfort in knowing that this was Jesus’ greatest temptation in life, too.  What?  You’ve never heard of Jesus being tempted like this before?  You’ll find it in the story of Jesus’ temptations in the wilderness.  His story offers insight for overcoming this significant obstacle.

As the story goes, Jesus entered the dry and barren wilderness where for forty days he fasted and was tempted by Satan, or the “Adversary” in Hebrew.  The Adversary first challenges Jesus to turn stone into bread.  Jesus refuses, stating that humans do not live by bread alone.  Next, the Adversary shows Jesus all the cities and kingdoms of the world, claiming they’ll be his if Jesus just worships him.  Jesus refuses, declaring that we are to worship God alone.  Finally, the Adversary takes Jesus up to the highest point of the Jerusalem Temple, challenging him to jump off and let angels save him.  Again, Jesus refuses, stating, “Do not put God to the test.”  Defeated, the Adversary leaves Jesus, to await “an opportune time.” (Luke 4:13) 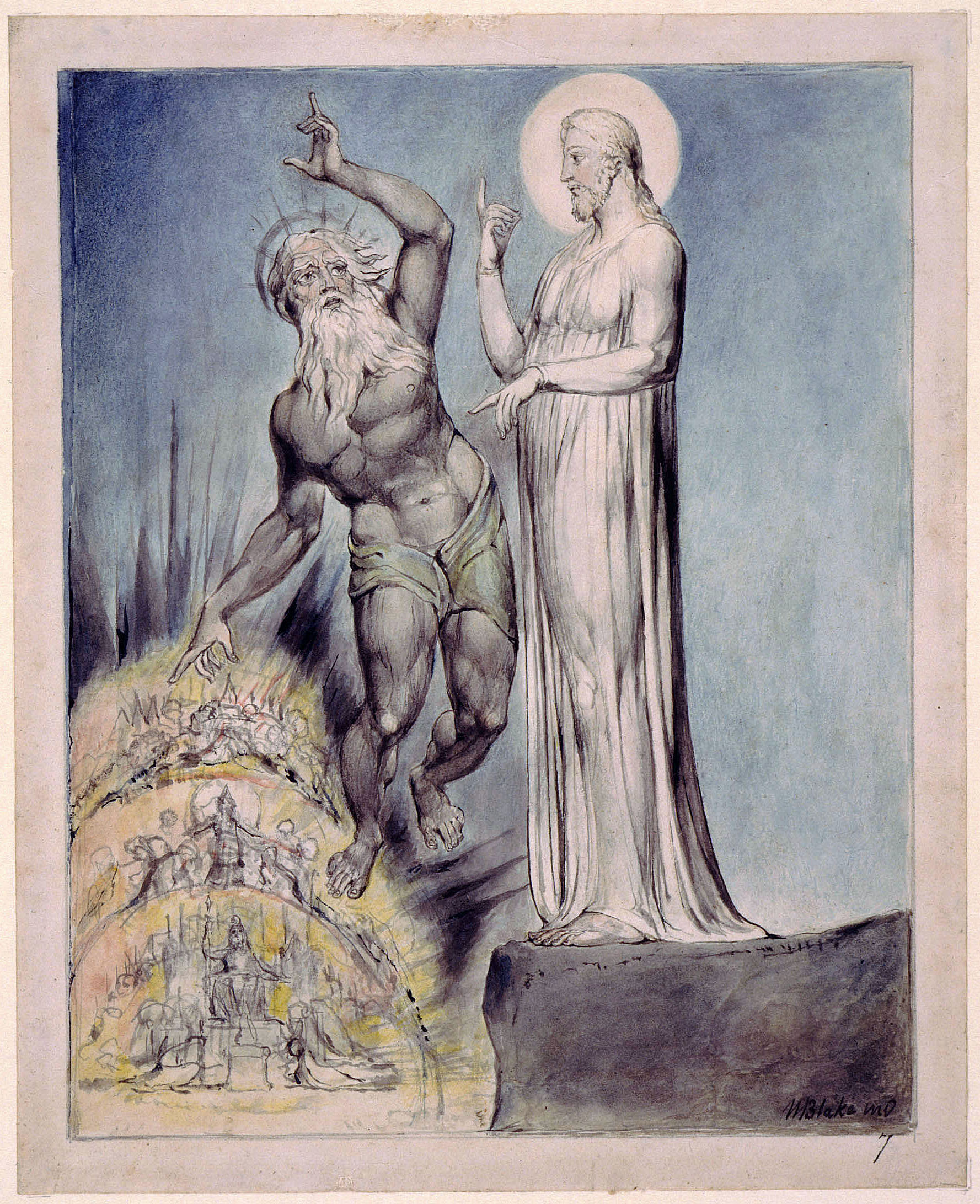 This illustration is by English poet, painter and engraver William Blake.  It reflects the mythological imagination behind this story better than any depiction I have ever seen.

If you did not know this painting depicts Jesus’ temptations in the wilderness, you might not realize that the person standing on the left is the Adversary.  He has neither horns nor fangs.  He has no sinister look on his face, neither does he carry a pitchfork like in the movies.  In fact, he looks quite pious, like he might be one of the great prophets–perhaps Moses or Elijah.  And he’s pointing up to the heavens while showing Jesus great and wondrous things Jesus could do on earth.

Here Blake displays his insight.  Blake appears to recognize that someone with the spiritual stature of Jesus would be even less tempted by overt evil than we are.  If you were the Adversary and wanted to tempt someone like Jesus, you’d have to roll out the biggest temptations you could possibly muster.  All of them would have been about doing good.  Let’s consider the specific “goods” Jesus was tempted by:

These temptations seem pretty harmless, don’t they?  If wielded by someone like Jesus, these gifts could easily do enormous good for the world.  If Jesus would base his ministry on turning stone into bread, he could not only feed himself (not a great temptation for the Messiah of God), but feed all the hungry of the world. (Now we’re talking!) If Jesus held all political power, this would not likely be an ego trip for Jesus (again, small potatoes).  But imagine how much good Jesus could do by changing a few laws and directing public and private resources to their best use.  Or if Jesus could impress people with some extravagant public miracles, he’d be more popular than, well, Jesus!

The point is, none of these activities would harm anyone.  Not initially, anyway.  And Jesus did feed the hungry, change the political equation, and perform miracles at various points in his ministry.

The problem is, as we’ve seem, there is a world of difference between doing good, and doing the specific good that will bring you fully alive in this world.  The Spirit beckons us not to be good, but to be human–humble, of the humus–which ultimately means finding and living in our sweet spot.  You can (and will) do a lot of good by walking the path that brings you most fully alive in this world, but you must pay attention to the specific calling of the Spirit.

What brought Jesus fully alive was not feeding the hungry, or practicing politics, or performing miracles.  Though Jesus did these very things at times, devoting his life’s work and mission to them was too small a calling for Jesus.  God called him to something far higher.  According to Christians, God called Jesus to be a Savior.  This calling to be Savior, of course, signifies different things to different people.  As my friend Bruce often says, the question is not “Are you saved?”  The question is, “Are you used?”  In other words, have you given yourself over to the Spirit in such a way that you are willing to allow it to lead you to your sweet spot and bring you to fullness of life?  Are you willing to move beyond the protestations of your logical, strategic mind and your well to figure out everything for yourself, to following the lightning and thunder?  When the Christian scriptures speak of becoming a “new creation,” I believe this is what they mean. When they speak of the “Kingdom of God,” I believe they refer to the place where our sweet spot resides.

Jesus’ own place in this world, or calling, was to live more fully into his human identity than anyone else had ever done before.  In doing so, Jesus reveals how much the rest of us resemble Pinocchio by comparison–how much we’re not our true selves.  Jesus also reveals that the more we live into our true identity, the more we resemble actual divinity.  That’s because in order to follow our best path in the world, we’ve got to move off the path of “common wisdom” and start following a path marked by lightning flashes and claps of thunder–those gut hunches and reverberations of peace and joy that emanate from the heart of God.