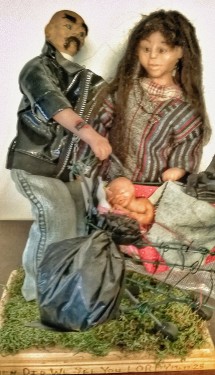 Talking with a colleague about this week’s parable about the sheep and the goats prompted me to consider adding “I’ve seen Jesus” to my ministerial profile. That would seem like good credentials for a Christian minister wouldn’t it? The truth is that is should be considered a basic expectation for every Christian because it is actually a rather common event.

I spent many years in ministry working among homeless and hungry people. While it is easy to romanticize poverty in the context of our call to service, I can assure you that those who receive your help can tell the difference between pity and empathy. Finding our commonality with those who are, as Jesus put it, the least of our brothers and sisters is a simple, but not easy, task. We must actually locate ourselves as their neighbors, befriending those who might be Christ in our midst. If we aren’t present in real ways, with our intention and attention, we will miss the divine presence that is possible.

Our intentions can be tricky things, for if we seek only to find Christ in order to be sure to serve him, then we are on the path to being goats. But if we don’t orient ourselves toward serving all who have need as if they are Christ then we can never find the sheep path. One of the most instructive stories of the multitude that come from my time in ministry among those made poor came to me from my wife, Gina, who was also involved in this ministry. She was at the roach-infested, broken-down apartment of Ellie, whose alcoholism and broken hip had kept her on the couch for a couple of weeks. She literally had not moved, so you can paint the rest of the picture yourself. It was clear that Ellie needed medical attention, so Gina called the Visiting Nurse Association. One of the nurses, Karolyn, who was now an administrator but had been the founder of the nurses’ clinic at our shelter agreed to come and care for Ellie.

Picture the scene of a professional woman dressed in nice business attire kneeling before a woman who had not bathed in weeks, carefully removing her socks to wash her feet. Seeing that, Gina was reminded of Jesus bending down to wash the feet of his disciples at the Last Supper. But then this parable came to her mind and she realized that in this particular scene the role of Jesus belonged not to Karolyn but to Ellie.

At my recent installation as pastor at Old South UCC in Kirtland, Ohio, Eric Elnes was kind enough to share a charge to the congregation. He couldn’t be physically present so Scott Griessel and Darkwood Brew came through to share him with us via video. I share it here because he tells a great story about looking for Christ in the other that helps to understand this parable.

So I can’t always tell you where or when, but yes, I’ve seen Jesus.  How about you? I hope that you share with me the desire and enthusiasm to keep looking as well. Even if that means being pushed into places that we may not go ourselves.