In the Land of the Living

My friend Paolo is dead.

Much of his life was spent in the fight against HIV.  He lived with the disease himself and worked as an advocate and educator for others in the struggle.  His loss leaves a deep and painful hole.

I met Paolo several years ago and we became fast friends.  He loved my wife Anna and bonded with her over saucepans and big boiling pots.  My connection with Paolo was forged on photography, philosophy and coffee.  We disagreed on the importance of chocolate, me taking the higher, more ascetic road.

Paolo, happily married to David, kept three straight boyfriends.  I was always curious as to my ranking.  Paolo assured me I was near the top.  Paul, a badass liberal attorney and martial arts practitioner being my primary competition.

It sucks that Paolo died too early.  I hate it.

I knew something was wrong when I started receiving texts Wednesday morning.  Texts urging a call right away. Texts from people who usually don’t text.  Cryptic texts.  By the third or fourth, I knew Paolo was either dead or in bad shape just by mentally cross-referencing the social connections.

Paolo and David moved from Tucson a while back to remake their life in Hamilton, Ontario, Canada.  Paolo died in a hospital Buffalo, New York.

March 25.  Paolo sent me this poem after I posted photographs of Omaha in snow.

Water in the Hill

the spirit of my breath

spreads into the night–

under my feet the

sing me on. I then come

to a remarkable sight

water seeping from the hill

had folded itself in as many

they’ve risen and fallen with

Until it came to

Funny. I remember talking to Paolo about impermanence after reading this. How in the summer, the only thing left would be the poem.

Yesterday in my meeting distracted by text messages, Eric said that maybe we are God’s own consciousness focused back on God.  Maybe God experiences reality through us.

You.  Me.  Paolo.  Maybe, in fact, that consciousness is God.

In Psalm 27, the writer (David or otherwise) asserts that even in the presence of our enemies divine goodness will be manifest in tangible, visible ways in this life – the land of the living.

HIV and small-mindedness are formidable enemies.

In my mind’s eye, I see Paolo in the land of the living.

I’ve been posting a photograph each week that expresses my relationship to the psalm we are focusing on.  This week, instead, I’ll post one of Paolo’s photos. 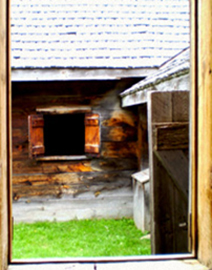