Was it just coincidence or was it the work of the Spirit that one verse of the Pneuma Divina passage this week was Simply embrace what the Spirit is doing in us (Romans 8:5, The Message)? With a guest extolling the value of hugging, it was quite appropriate to be prompted to hug what the Spirit is doing in us. Marsha Bonner became known to the world through a simple, yet bold, act of kind confrontation in the face of ugly discrimination. (If you are not familiar with the story, either watch this week’s episode or check it out here.) As she confronted with a hug, she was inspired to say that HUGS “Help Us Grow Spiritually”! She was affirming what the Apostle 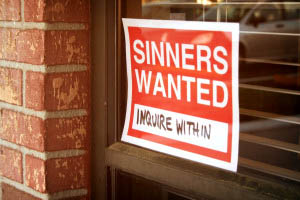 Paul was encouraging in the letter to the Romans, if you want to grow in the Spirit, embrace what the Spirit is doing. Of course, that is not always a welcome thought, because sometimes what the Spirit is doing is (to quote Eric’s weekly benediction) “pushing us into places we might not otherwise choose to go.” And it is far from uncommon for that that pushing to come in the form of our failures.

Finding the gift in failure is often little more than the conclusion “I’ll never do that again!” Sadly, that is too often a short-lived conviction. Surely, there is deeper learning to be had in exploring the ways in which we fail. One piece of that is the wisdom found in the first of the Twelve Steps of Alcoholics Anonymous, We admitted that we were powerless over alcohol–that our lives had become unmanageable. Of course alcohol is not the only thing that one can become powerless over. The Apostle Paul spoke of a powerless over “the wretched body of sin” doing the very thing he didn’t want to do and not do the thing he wanted. The wisdom lies in the admission of powerlessness, in acknowledging defeat, in hugging failure.

We perceive that only through utter defeat are we able to take our first steps toward liberation and strength. Our admissions of personal powerlessness finally turn out to be firm bedrock upon which happy and purposeful lives may be built. -Twelve Steps and Twelve Traditions, Alcoholics Anonymous World Services

Millions of people have found recovery through the Twelve Steps that start with hugging failure. Ask anyone you know in recovery if in that context they consider failure to be a gift. That is not to say that one must continue a destructive descent in order to find salvation. The elevator stops at every floor, you don’t have to wait for the basement to get off. But knowing that the elevator will keep taking you down is hugging failure and thanking it by pushing the stop button and getting off. We not only heard that from Marsha this week, it radiated from her. May we all start embracing failure and receive the gift of spiritual growth.