How High Is Your Horse? 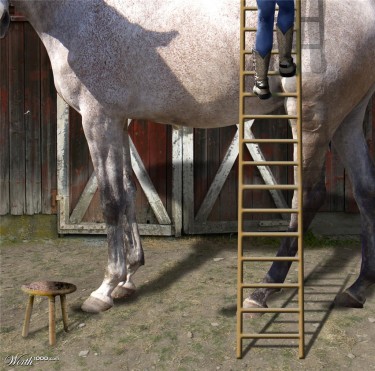 President Obama recently got a good deal of grief for suggesting that Christians should not get on their high horse in criticizing the current barbarism being displayed by some in the name of Islam forgetting our own history which has its own horrific acts of violence done in the name of the Prince of Peace. The criticism came from those who want the American President to govern from a position of power with the rhetoric to match. While I prefer a larger distance between state and church than is evidenced by a politician speaking at a prayer breakfast, Obama deserves credit for his understanding of what Jesus taught about greatness.

The Narrative Lectionary has us begin Lent with a reading on Ash Wednesday about how Jesus defied greatness. When asked who would be the greatest in the kingdom of heaven he chose a child. He explained that if you want to enter this kingdom you must become humble like a child. The Greek word for humble used here is tapeinao. Its literal meaning is to level a mountain. The entrance to the kingdom is not on the mountaintop. Greatness is meant to be known from the depths up not from the heights down. We find the presence of God in our powerlessness. If we are to enter God’s realm, we need first to get off our high horse. Being so accustomed to the lofty heights of great power makes it all the harder to accept Jesus’ call to childlike humility. When all you have is a hammer every problem looks like a nail.

The lectionary reading for this Sunday deals with forgiveness, including instructions on resolving conflict. Jesus’ conflict resolution plan involves coming to the other from a position of equal or even lesser power. We are told to encounter the one with whom we have a dispute one-on-one first. Surely it is wise to begin the approach as one who is powerless like a child eager to make things right again rather than a self-righteous victim riding in on a high horse. Somehow in the process of growing up we all too easily forget (or unlearn) the lessons we were taught as children not to come into a conflict fully loaded with guns blazing (metaphorical in playground scrapes yet tragically literal in international politics). When we complain with childish impudence “no fair!” it is necessary to regain the childlike innocence to trust the one who reminds you that fairness is for all not just for you.

Even in the final stage of Jesus’ conflict resolution plan we see the concern for the other when we put it in the larger context. When we have exhausted all channels for resolution we are permitted to treat the person as ”a Gentile or tax collector.” That is to say that the person can be seen as someone who is not “one of us” or a member who is at odds with the community. And how should we treat Gentiles and tax collectors? If Jesus is our example then we need to spend time with them welcoming them to join us. I would expect that the one writing this gospel, Matthew the tax collector, intended for us to draw that conclusion.