No matter what, when I first think of hope, or the idea of hope, an unusual image surfaces in my mind. The face of Tony Shaloub, as the acutely observant and ever so dour savant detective Adrian Monk. In one episode, when his long suffering assistant Natalie says to him, “Mr. Monk, you’ve got to have hope!”. Monk replies, “Hope is bad!” I always chuckle. What a statement. Why? What kind of hope is bad? The kind we lost when the revelation of our belief system in the Easter Bunny became a reality? The non-real revealed?

It is similarly referred to in a quote by H.L. Menchen used by Scott Sanders in Hunting for Hope…”the pathological belief in the occurrence of the impossible.” The logic is so apparent and clean, but there’s the rub.

I have been, and to an extent am still the Scott Sanders Dad of the beginning of his book – Ask Dr. Elnes, who gave it to me, for that reason I’m sure. I have great hope for the future, for my children’s world to come etc…Despite that I never stop bitching about the bank thieves, and the political mountebanks and ineptitude of all and sundry surrounding me. This litany must seem the elevator muzak of our home at times. Yet I grew up with ‘duck and cover’ in the dawn of our nuclear age. The furor of civil rights demonstrations, and the near civil war strife of the Vietnam Era that makes the Tea Party of today seem, well like a tea party. Through it all…and many personal plights, I had Hope. Illogical as it seemed with so many omens of doom – but there, none the less. Hope for me is seemingly in our genes. Hope is indefatigable – the God that is a true pathway of love for so much of what is around us. Something akin to Wallace Steven’s “voice that is great within us.” It flies in the face of logic and for that reason we cling to it and relish it. I agree with Scott Sanders that to be in the here and now I need to look both back and look forward clearly.

I think of a few favorite passages from The Great Gatsby. The narrator, Nick Carroway, in the book’s opening describes Gatsby as one “who represented everything for which I have an unaffected scorn.” Yet in the same passage he finds the redeeming quality of Gatsby – ” it was an extraordinary gift for hope, a romantic readiness such as I have never found in any other person and which it is not likely I shall ever find again.”

“…Gatsby believed in the green light, the orgiastic future that year by year recedes before us. It eluded us then, but that’s no matter – tomorrow we will run faster, stretch out our arms farther… And one fine morning – So we beat on boats against the current, borne back ceaselessly into the past.”
In another moment Nick says to Gatsby, “You can’t repeat the past.” Gatsby incredulously replies something to the effect of, “Can’t repeat the past? Why of course you can old sport.”

It seems to me we humans have been doing it through the ages in different costumes and décor. Hoping, ever it seems, for newer better results. The idea of hope for me, is like the roar of the Oceans…It will never go away. 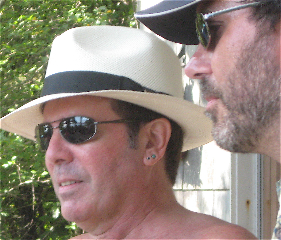