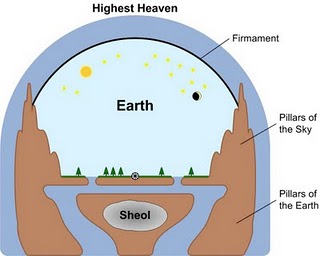 First, let me warn you that I took four years of Greek in college and I’ve been part of a group translating the Gospel of Matthew for the past three years, so, yes, I’m a Greek geek! As part of this obsessive behavior, I noted that every time that Matthew spoke of the place where God is, he used the plural and when he was referring to the place where birds fly he used the singular. So, the proclamations of Jesus were about the kingdom of the heavens, not the kingdom of heaven. And the example of God’s amazing care for creatures extends to the birds of the heaven (i.e. sky) who don’t toil like we do but are “careless in the care of God” (Eugene Peterson’s wonderful translation of Matthew 6 in The Message).  This reflects the ancient Hebrew view of the design of the cosmos.

In the imagination of the ancient Hebrew mind, there were a series of heavens. The first heaven, i.e. the visible one, is perhaps better translated as sky. Beyond that, wherever and whatever that is, there are the heavens. Perhaps like layers of an onion, something out there is where the invisible spiritual things happen. The heaven is the realm of birds, the heavens are the realm of God. When Jesus proclaimed that the Kingdom was at hand, in the Gospel of Matthew it is the Kingdom of the Heavens. When Jesus tells us not to worry by looking at the birds, he tells us that they are in the heaven.

With that in mind, the Lord’s Prayer in Matthew starts by addressing our Father in the heavens, but when we pray that God’s will be done on earth, it is as it is in heaven. Huh? Shouldn’t we want what is happening in the heavens to happen on earth? What I hear in this prayer is an echo of the creation story. In the first chapter of Genesis, we hear a story of God creating humanity to have dominion not over, but with the birds of the air and the beasts of the field and the fish of the sea. (I’ll avoid a rabbit trail into Hebrew grammar, but trust me, the preposition is always translated with elsewhere, so why not the same here?) So, when we pray for the Reign of the Heavens to become manifest where we are, we ask that it appear in the realms where we share dominion with the rest of our fellow creatures in all of creation. The revolution that Jesus began and calls us to join is incarnational, it takes on physical form in and around us. We are not just waiting to see the new heaven and the new earth, we are to exercise the dominion granted to us by God in the beginning to usher it in.

Are you really ready to pray for the Reign of the Heavens to be visible in the heaven above you and the earth beneath you? Are you ready to bring about justice? Are you ready to care for creation as a faithful steward? Are you ready to end homelessness, and hunger, and war? You better be if you are praying the Lord’s Prayer. The revolution will not be televised…it will be incarnated in the people of God who pray as Jesus taught us.