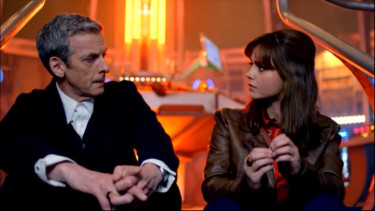 In the first episode of Doctor Who this season, robots were capturing humans for their parts. Clara is able to avoid detection as long as she holds her breath, but she eventually exhales and is captured. During the ensuing interrogation, she is asked again and again “Where is the other one?” Knowing that she is having her doubts about the reliability and faithfulness of the newly regenerated Doctor adds a dramatic double entendre to the question. Still, she holds out her hand at her side waiting for the grasp of the one who has saved her every time in the past. And, naturally, the Doctor appears and pulls her once again to safety.

Peter must have taken a similar deep breath when he stepped out of the boat and into the storm. But since he trusted both the call and the one who called him, that faith and trust is met with success when he steps out of the boat. He is able to participate in the miracle. I can imagine myself in the boat thinking “what’s the worst thing that can happen?” And concluding that death by drowning was not only the worst case scenario but also most likely and choosing the relative safety of the boat. Peter must have drawn a different conclusion. He must have seen the worst case being the one that happened: Jesus would reach out his hand and save him. That is the faith that Jesus names as the type of foundational rock that the church could be built upon. One lesson in the story is that once we are sure of our call to the point that it is irresistible, we are confronted with a crisis of faith: do we trust the one calling us enough to take the risk of leaving the boat like Peter, or will we be like Jonah and take the first boat going the other direction? If we truly know the one calling us, we should know that we will make it out of the boat one way or another, even if it means a new mode of transportation in the belly of a whale!

One thing you cannot accuse Peter of is abject failure. Sure, his faith didn’t keep him walking on the water for long, but it was also his faith that kept him from drowning. That is more than can be said about Jonah, whose lack of trust and outright disobedience nearly sunk the boat he was in, taking others with him. The real choice we should be struggling with isn’t whether to get out of the boat or not, we will be overboard one way or another when the storm comes. No, the real question is whether we know the one calling or only know about the caller. Doctrine and dogma are powerless to save us and serve as poor motivators compared to the compelling force of a relationship with a proven savior. So take a deep breath, step out of the boat, and hold out your hand when your supply of faith runs out, because there will be a trusted hand to grasp yours at your limit.