Connecting with Your Inner Harpooner

In his book, The Contemplative Pastor, Eugene Peterson speaks to one of the largest communities of “Marthas” on earth: Christian ministers.  Many ministers take pride in being busier than the average person, and letting people know just how busy they are.   Yet Peterson thinks this is craziness.  He compares the best “work” of a pastor to a particular person in Herman Melville’s Moby Dick.  Do the following words apply only to pastors? 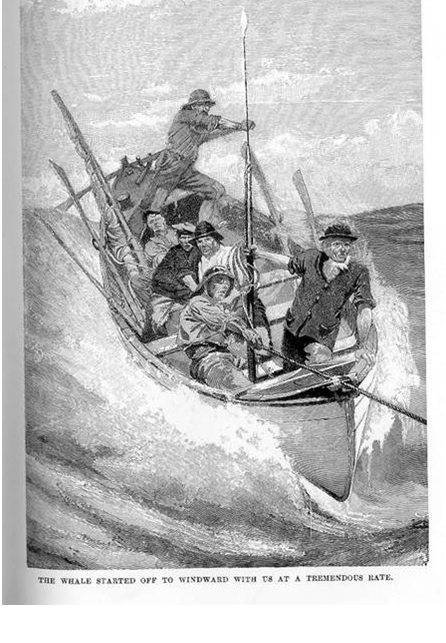 In Herman Melville’s Moby Dick, there is a turbulent scene in which a whaleboat scuds across a frothing ocean in pursuit of the great, white whale, Moby Dick. The sailors are laboring fiercely, every muscle taut, all attention and energy concentrated on the task. The cosmic conflict between good and evil is joined; chaotic sea and demonic sea monster versus the morally outraged man, Captain Ahab. In this boat, however, there is one man who does nothing. He doesn’t hold an oar; he doesn’t perspire; he doesn’t shout. He is languid in the crash and the cursing. This man is the harpooner, quiet and poised, waiting. And then this sentence: “To insure the greatest efficiency in the dart, the harpooners of this world must start to their feet out of idleness, and not out of toil.”  (The Contemplative Pastor, page 24).

In each of our lives as individuals, there is a time and place for rowing, and one for harpooning.  Sometimes, you’ve just got to buckle down and trudge away with all your might.  Other times, you’ve got to set down your oar, no matter how many people complain about your “shirking your responsibility” to stop, breathe, look around, and listen.  Otherwise, you may miss whatever you were rowing so fervently to catch.  Or worse, that which lies beneath the turbulent sea may come up from under you and overturn your boat. (That’s a great metaphor for what our soul does to us when we’re not attentive to it, by the way!)

My elder daughter, Arianna, is in Petersburg, Alaska, right now canning salmon even as I preach.  She’s on her sixth straight week of 16-hour days without a single day’s break.  In other words, she’s “rowing” faster than she ever has in her 22 years of life.  As much as she’d like to be like Mary right now, sitting in idleness, she literally can’t.  The region she’s working in is experiencing its largest salmon run in recorded history.  Yet next Sunday she’ll finally be through.  She’ll fly to Portland to meet Melanie and me and we’ll drive down to our cabin in Bandon where we’ll scatter Melanie’s mother’s ashes.  Over the course of that week, we’ll all be taking time to be idle; to take quiet walks in the woods and along the beach; to tell stories around the fire pit as we roast local oysters and salmon; to play and to pray.  It will be “harpooner” time for the three of us.  It will be our time to pause for one last extended time see the “forest for the trees” before the busyness of fall hits.  If we do it right, then when we hit fall, we’ll hit in the exact direction and with the exact energy we need to.

Taking breaks like this is enormously helpful, but we all need this “harpooner” time more than once or twice a year.  That’s why God commands us to take a Sabbath day each week.  It’s also why God commands us to spend time listening for the Spirit’s voice each day in prayer and meditation. I think it’s also why we were created in such a way that we must spend 1/3 of our lives sleeping and dreaming.

Our dreams have more to do with staying in touch with your “inner harpooner” than you may think.  But that’s the subject of tomorrow’s post …