In May of 2004, just weeks after same-sex marriage was legalized in Massachusetts, Gail and Evelyn honored me by having me co-officiate their wedding. (For the record, in the 8 ½ years since that historic event, they sky over over our state has not fallen). During the ceremony I talked about something that was abominable.  That would be the Abominable Snowman from the classic Rankin and Bass Christmas special, “Rudolph the Red-nosed Reindeer.” 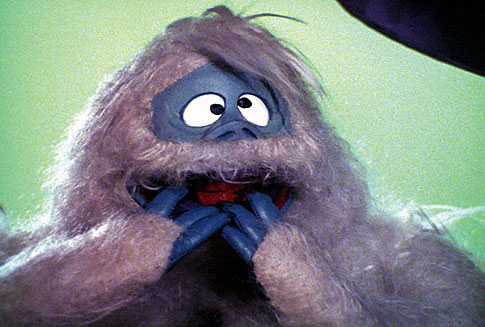 To be abominable is to be detested and that was surely the case for the poor “Bumble” (as Yukon Cornelius was taken to calling him), though it turns out that it was out of unfounded fear of the large, ferocious looking creature who was surely “other” to the main characters in the story.  Then again, the main characters are themselves self-labeled misfits.  I spoke to Evelyn & Gail and the gathered friends and family about how it was the very misfits who literally took the teeth out of the Bumble, creating the path for him to become an acceptable and useful member of the North Pole community (his height being just the right gift for topping the tree with the star).  I then compared the ground breaking wedding of two women as a way of making toothless what had been for far too long considered an abomination.  I had no reservation celebrating the loving, committed union of two kind, loving, Christ-following children of God, even though the book we call scripture does in places use the word “abomination” to describe such a union. 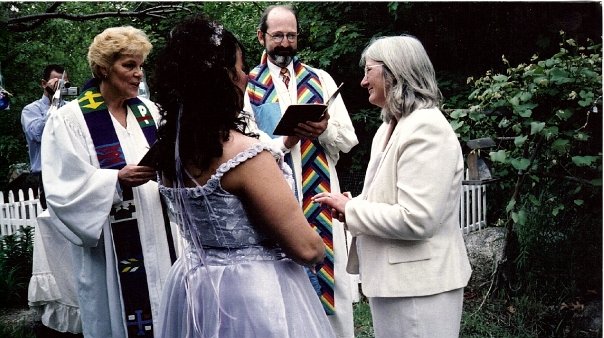 To be precise, the Bible is actually rather silent on the issue of lesbian relationships, and only has a few references to homosexual (by the way, a word created long after the Bible was written and even after it was first translated into English) relations between men.  But there in the purity codes of the book of Leviticus are these Hebrew words that have been translated as “abomination.”  I’ve done some research into the language, but I’ll leave it to Dr. Elnes who has a PhD (drink!) in this stuff to expound more on it.  The short version of what I found is that we might all have been spared quite a bit of the disparaging of our LGBT brothers and sisters if translators had chosen what in my humble opinion would have been a better word, and that is “taboo.”  I must concede that what is described in those ancient texts was prescribed as the law for the faithful; and violating some of those laws had dire consequences.  There was to be no “lying with a man as with a woman” just like there was to be no eating of any seafood that didn’t have scales and fins.  But there is a clear question begging to be asked, ie why are Christians today so overwhelmingly OK with violating the latter law but still hung up on the first?  Why do we understand our liberty from the law by the grace of God shown in Christ allowing us to not be bound to keep kosher, but somehow not freeing the LGBT community to live fully as God created them?

Long before I grappled with the question of whether homosexuality was sin, I remember hearing teaching about how kosher law was likely a very good way of avoiding common food borne diseases a few millennia ago which is no longer an issue given advances in understanding of safe food handling. Conspicuously absent from that teaching was a parallel teaching that men not having intercourse with women was taboo for a society that valued population growth as vital to its survival.  In a society where social welfare was primarily the responsibility of the nearest kin, guaranteeing offspring was essential.  Consider the fact that there were laws requiring a brother to impregnate his brother’s widow if she were childless at the death of her husband.  Not honoring this obligation was taboo in ancient Israel (including the time of Jesus) and would surely be seen as taboo in our society today.  One can see how two men in relationship with each other could be seen as two men lost to the important role of begetting future Israelites and thus unacceptable.

I get it that there is a slippery slope here when it comes to questioning the authority of scripture in part because that means that it can be questioned in its entirety.  Believe me, I get it.  I have taken that fearful toboggan ride in my own faith journey.  But please trust me when I say that there is most assuredly a way to hold on to the baby while still throwing away the dirty bath water.  Like so many others, I take the Bible seriously but not literally.  I see in some of the parts, like some of these purity codes that oppress, a contradiction with the the larger story of God’s loving each and every one of us madly. I will always resolve that contradiction with an appeal the larger story of love and radical inclusion before I give in to proof texting justifications of prejudice, bigotry and hate.  In that respect, the shift in approach to viewing scripture is not as frightening as it may appear at first, since it is always a move toward a more complete and compelling embrace of love.  And that love must include a patience for companions on the journey of faith who haven’t quite caught up to where you find yourself at any given time.

Returning to the metaphor of the Abominable Snowman, recall that he is seen going over the cliff to his supposed death, sadly taking a friend with him. Too often we see destroying the source of our fear and consternation as the only option.  Thankfully, we also have the option of doing a bit of dentistry to take the scary out and bring what once was misfit into a wonderful new fit in a retooled social structure that has more room than we thought.