So I’ve been in a rather Pauline mood this week.

It started Tuesday.  I rushed to get my Darkwood Brew work done Monday so I could leave early the next day to be driven into the desert washes around Tucson and meet people who live there; people described as “experiencing homelessness.”  Some of them have been existing on the margins of our society for many years.  Men.  Women.  Young.  Old.  Familes.  Kids.  At least one man, a sort of leader in the camps, has been living this way for almost 30 years. 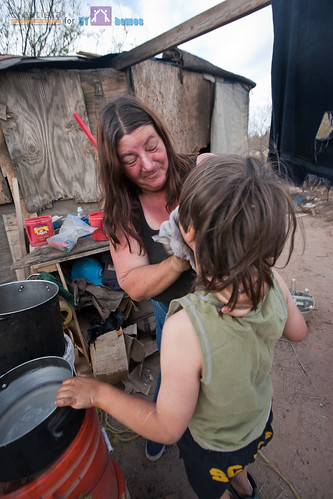 I was working with a group called 51 Homes, part of 100,000 Homes.  Their goal is to quickly (in three days) locate and interview as many as possible of the people in the Tucson area experiencing homelessness, and determine the most medically-vulnerable.  51 apartments are ready to receive them.  It’s the sort of fast-action stuff I love.  It takes days, not weeks or years.

I also like that they named it 51 Homes…since the Phoenix program is called 50 Homes.  One-upmanship is not dead in the desert. 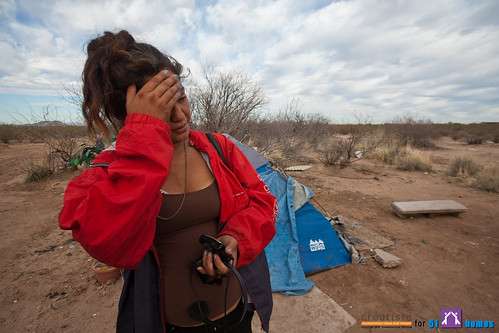 Now, I know there are a lot of reasons people are out on the streets, or, like many in the Tucson area, the desert.  Way too complicated to try to dress down in a blog.  I do want to explore a little bit about how we interact with them, and how we feel about ourselves relative to them.  I wonder WWPD?  Well, since you asked, he might say:

Carry each other’s burdens, and in this way you will fulfill the law of Christ. If anyone thinks they are something when they are not, they deceive themselves. Each one should test their own actions. Then they can take pride in themselves alone, without comparing themselves to someone else, for each one should carry their own load.

So it sounds like, according to Paul, we’re supposed to help our neighbors, not compare ourselves to them. 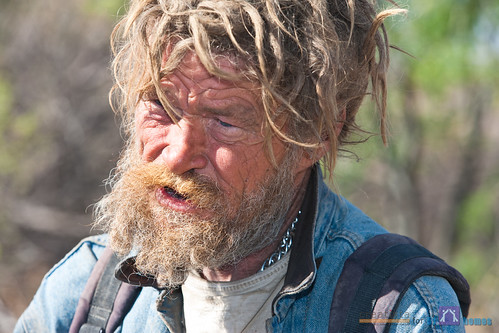 It is estimated that there are about 6,000 people experiencing homelessness in and around Tucson.  The people I met Tuesday live within easy walking distance of several sub-divisions.  In fact, they are pretty much surrounded by sub-divisions.  While that makes for some apt irony relative to their plight, it also just begs for comparison.  The “haves” and the “have nots.”  Right?  I do it all the time.  Maybe comparing is part of being human.

I heard a sociologist explain that the reason we adore athletes and celebrities may be because knowing who was successful and who wasn’t made a big difference to the Cave-Dwelling Set.  Now it’s just a theory, but it seems to make sense. While identifying the faces of successful people may still be a good evolutionary strategy, it was even more useful when we wanted to eat a mammoth.  Following the guy who tends not to get killed isn’t a bad tactic…so you have to be able to remember what he looked like and immediately recognize him.  Plus, you have to understand where he fits in the order of things.  If he’s a big cheese, he’s worth snuggling up to.  However, maybe some residual effect of that pecking order bias isn’t as helpful.  For instance, when we meet these people who live in the desert without much stuff, our socially-aware brains start right in on the judgements: “These people are not successful.  These people can’t help us.  These people are inferior.  There is nothing you can learn from these people.  These people are failures.”  I’m not sure we can help it…I think it’s programmed in somehow.

To which, I believe, Paul is saying to try to listen beyond that obvious message.  My friend Kristine, too.

Kristine works for one of the social service agencies in Tucson and has been instrumental in handling the PR and media liaison function during the 51 Homes activities.  She told me they wanted to have us film and photograph the activities because “We need to tell everyone that these people are not trash.”  Now does that sound like it could be a modern day interpretation of Paul?  Um, yes. 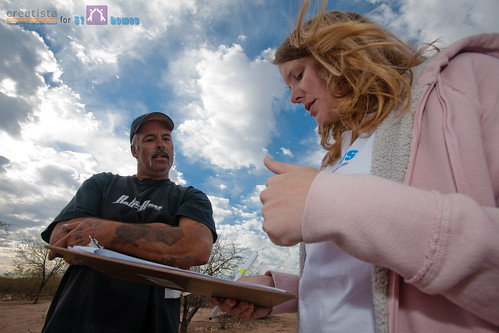 OK.  So here’s what I observed in my short visit to the camp.  The people I met watch out for each other.  They help each other every day.  One man goes for water each morning and brings it back for everyone.  One woman has ten children…among them a lawyer and a veterinary surgeon and almost all of them are college graduates.  If someone is sick, they take care of them.  They share the little food they have.  They want a better life.  They like to laugh.  Most have been victims of violence at some point.  They love their kids. 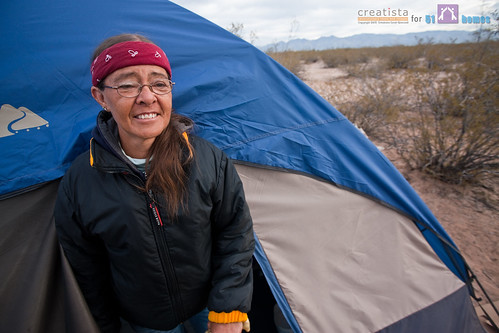 So it gets a lot easier for us to see these people as people if we get our ego out of the way.  If we don’t want or need anything from them, their relative status is meaningless anyway. Maybe ultimately the abrasive message of Paul is to treat people the way we would want to be treated.  I think I’ve heard that somewhere before.  I’ll have to look it up.  🙂  Maybe as a corollary we could also work on thinking of people the way we would want to be thought of…as fully human, and equally valued in the face of our differences and disparities.  Each on a path to somewhere.  None of us really knows where.

Now here’s some personal and Darkwood Brew trivia.  In my thinking, you can draw a direct line from April 15, 2006 to today.  That’s the day six core walkers, accompanied by a crowd of well-wishers took their first steps on the 2,500 mile journey of CrossWalk America.  If not for that trip and the things discovered along the way, I believe Darkwood Brew would not exist.  Maybe that’s an exploration for another blog.  However, it’s also the day I met PER’FESSER MARK CREEKWATER.  The caps are intentional…that’s how he likes it. 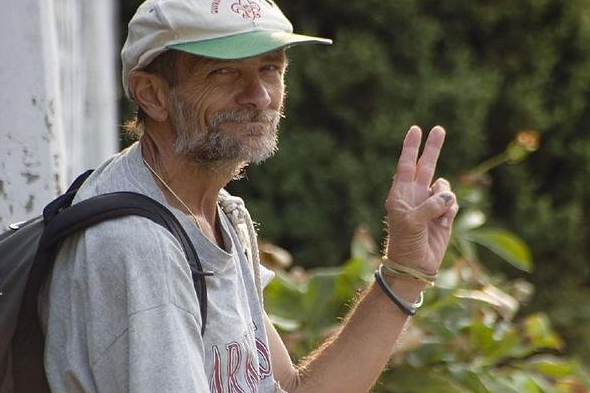 On the last installation of a series on Abrasive Grace, I think Mark (I’ll revert to the standard use here) is a great reminder to us of the practical aspects of Paul’s message.  If you’ve read Eric’s book, Asphalt Jesus, or seen my film, The Asphalt Gospel, you know Mark.  He’s the creekwater-drinking, cross-country-walking, reverse-osmosis-decrying, perpetually-houseless guy who decided to walk to Washington DC with the team.  He could be, and can be, abrasive.  Walker Meighan Pritchard diplomatically stated “he sees things differently than we do.” 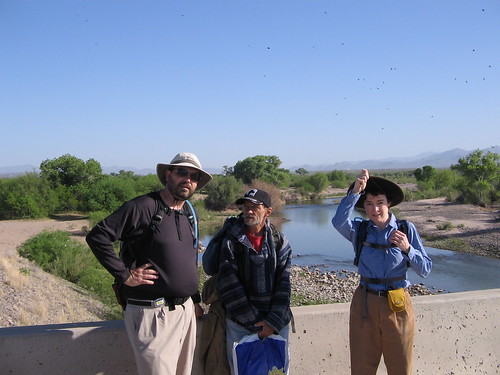 Eric, Mark and Meighan – exactly 5 years ago this Sunday the 17th

So why have him along at all?  The walk was intended to carry a message of inclusion, openness and compassion through the heart of America.  To recognize that people are on many different paths, even different spiritual paths.  I don’t know exactly what Mark’s path was or is.  However, when CrossWalk America invited anyone to walk with them for a mile, all the way, or something in between, thousands of people took them up on their offer.  Mark wanted to walk the whole way.  They honored his desire and made him a “Special Guest Walker.”

And just like learned to see things in a new way the other morning in the desert camp, they learned a lot about life on the road from Mark.  In fact, within a day, the walkers had adjusted to a safer practice of walking facing traffic at his suggestion.  We all learned from Mark.  I got some great tips for dumpster diving if anyone is interested, and I now know where they throw out really good pizza every night in Wheeling, West Virginia.

Mark was abrasive.  But he could also be charming, funny and insightful.  His presence was a gift in so many ways, and ultimately the most visible manifestation of the real message of CrossWalk America I can imagine.  Mark showed up, he was the neighbor, they shared the journey with him.

So it is that the abrasive message from Paul is carried out every day in small ways when we open our lives to people who are different than we are…people who see the world differently than we do.

After being seriously abraded by Galatians, you’ll definitely want to join us for a series exploring Rob Bell’s controversial and insightful book, Love Wins.

Here’s a plug…  check it out